Not long ago I walked into a local branch of my bank – the 13th largest bank in the United States based on consolidated banking assets, according to the Federal Deposit Insurance Corporation's (FDIC) second-quarter 2015 data.

I wanted to cash a check for a few thousand dollars. It was a business check made out to cash; it was my business account and there was plenty of money in it.

Well, what happened next was downright scary. And I’ll tell you exactly what happened because it has profound implications for every American.

That's because it means capital controls, courtesy of the government and the U.S. Federal Reserve, could be right around the corner. They're already in effect in some form.

So, here's what happened to me at the teller's window…

When I went to cash the check, a routine activity that must happen tens of millions of times every day in the United States, the woman behind the big, thick glass partition said, "I'm sorry. I can't cash this for you."

She replied matter-of-factly, "I don't know you." 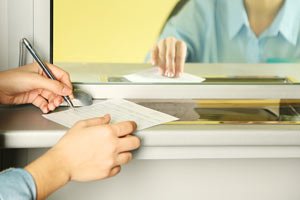 "You don't know me because you're new here," I replied. "Please get the branch manager," I requested politely.

"I'll call her, but you'll have to fill out this form," she told me as she reached into a drawer under the counter.

Just then the branch manager came over to the teller inside the cage. "Hi Mr. Gilani, is there a problem?" she asked.

"Yes, there is a problem," I replied. "I'm trying to cash a check and first this young lady said she didn't know me and couldn't cash the check, then she said I'd have to fill out some forms to get my money out. What's going on?"

The manager told me there were some "new rules" they had to follow. She acknowledged she knew me, telling the teller I was okay, but told me I'd still have to fill out the form.

"I am not filling out any form ever to take my money out of my account," I stated. "Is that a federal law or is that this bank's idea of customer service?"

"It's just what we have to do now," the manager replied.

So I looked at her as if to say, "Really? You're not going to tell me why I have to fill out a form to take cash out of my account?"

Then I said, very calmly, "I'm sorry – and I don't want to be a jerk – but if you don't cash this check or if I'm ever asked to fill out a form again when I cash a check, I'll close all my accounts here."

I got my cash… and a seriously creepy feeling.

If you think you’ll always be able to get your money out of your bank, you’re wrong.

No one – no one – has ever been able to tell me why the teller wouldn't cash my check, not even those friends of mine who actually own banks. The best answer I got was: It was a new teller and she probably didn't understand the "SARs rules" and figured she'd better not cash the check, in case she got in trouble.

Which begs the question, what are SARs?

They are Suspicious Activity Reports, and according to the Federal Deposit Insurance Corporation's (FDIC) website…
"A bank shall file a suspicious activity report with the appropriate federal law enforcement agencies and the Department of the Treasury, in accordance with the form's instructions, by sending a completed suspicious activity report to FinCEN (Financial Crimes Enforcement Network) in the following circumstances:

Banks fill out these reports regularly. They have to… or else…

You see, according to a post on the well-respected ZeroHedge.com site, "Banks have minimum quotas of SARs they need to fill out and submit to the federal government. If they don't file enough SARs, they can be fined. They can lose their banking charter. And yes, bank executives and directors can even be imprisoned for noncompliance."

As annoyed as I was with the difficulty of getting my money out of my account (and the teller no doubt filing a SAR on me), at least I was able to get my money.

But that can change.

There are two scenarios where depositors could either be restricted from withdrawing their cash or have their deposits confiscated and converted into bank stock shares.