There is a lot of money and influence at stake for the GOP presidential candidates this week... 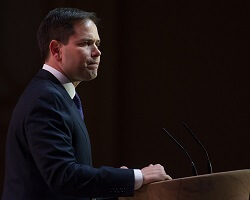 One wrong word could cost a candidate millions.

For example, Chris Christie got into a lot of trouble at the RJC in the spring of 2014 when he reminisced on time he spent in the Middle East. Christie noted that he'd taken a helicopter from "occupied territories" that helped him "understand the military risk that Israel faces every day." The "occupied territories" to which Christie referred, however, were the West Bank and East Jerusalem - land the Israeli government and many of its supporters believe it has a right to.

While the story was intended to forge commonality with the present donors to whom Christie was speaking, his use of the term "occupied territories" upset members of the crowd. To them, it validated "Palestinian challenges over Israel's presence," reported Politico on March 28, 2014.

One attendee, Morton Klein, president of the Zionist Organization of America, told Politico that he considered Christie's mistake exemplary of a noncommittal candidate who doesn't know the issues. Which begs a few questions about the 2016 presidential candidates set to attend Thursday's event: