Editor's Note: We've been following the steady path of the Chinese yuan toward global reserve currency status since the start of the decade, and we've taken some big gains at key stops along the way. But now that the yuan is officially "in," this profit play could be the biggest of all…

On Monday, the Chinese yuan gained official approval to join one of the most elite clubs on the planet: the International Monetary Fund's Special Drawing Rights basket of reserve currencies.

The consequences of this move will be huge. For the unprepared, this event will ultimately prove devastating.

But even though we've been expecting this move for years now, we have a limited time to get maximum upside from this development.

Lagarde left the decision to the Fund's executive board, but by then it was all but official. The IMF had finally determined the yuan to be "freely usable" and sufficiently used in international transactions and forex markets. 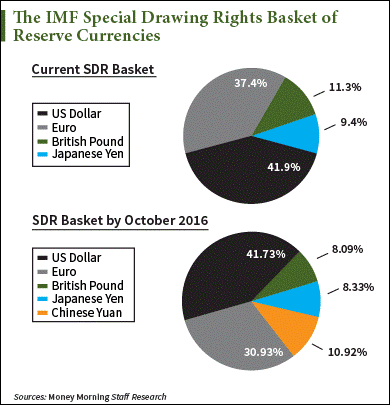 It's an achievement that went from laughable to laudable in less than three decades.

It's easy to see why the IMF felt that China was ready. China's economy is now the world's second largest.

China's accomplishments in that short time are just shy of miraculous: Soaring standards of living, a massive infrastructure buildout, and rapid modernization have left even the biggest doubters shaking their heads.

China hasn't been shy, either, relentlessly pressing its own case to the IMF.

So here we are today. The yuan will be joining the U.S. dollar, British pound, the euro, and the Japanese yen in the IMF's elite Special Drawing Rights basket.

Officially, the yuan will become part of the SDR currency basket only on Oct. 1, 2016. But that just means we have 10 months' head start to profit.

But the profits could be immense. And a lot of players in global finance agree…

Both Standard Chartered Plc. (LON: STAN) and AXA Equitable Insurance estimate that adding the yuan to the SDR currency basket will cause $1 trillion to flow into the currency.

Hayden Briscoe, managing director of Asia Pacific fixed income at asset manager AllianceBernstein Holding LP (NYSE: AB) said, "This should help underpin China's continuing efforts to internationalize the currency and its capital account – moves which, our research suggests, could lead to inflows of up to $3 trillion over the next few years."

Stephen Innes, chief trader at currency firm OANDA Asia Pacific in Singapore, said, "Once investors become more comfortable with Chinese markets, especially if they continue to progress with opening policies and make the same strides they did over the past year, international markets will really embrace Chinese capital markets."

The Best Way to Play the New Yuan

Currently, shares trading in yuan are nowhere to be found in either major emerging market or even Chinese stock indices.

I keep reading everywhere among all the investment newsletters about this now solar break through that will turn the energy world upside down. I also read that the Bigs (Zuckerman, Gates, billionaires de jure) are investing heavily. If history means anything, energy isn't going to cost less for the consumer but more accurately means gigantic profits potential for the aforementioned Bigs.

Why are we not hearing anything on the science front about this supposed technological revolution? Wouldn't this be the most important development since the discovery of fire? Yet nothing is being heard outside of Investment gurus (and I mean all of 'em) sending out the same promotional material to their respective readers.

It disturbingly reminds me of the days of "Make gazillions selling information products on the Internet" where one guru would come up with a pitch and offer a piece of the action to "affiliates" if they would expose the package to within their sphere of influence. They all make money selling a pipe dream.

Me olfactories sense the presence of rodentia.

Everybody is saying buy Gold and Silver to hedge against the coming financial crisis. Okay I went out and purchased some Gold and Silver my question is lets say Silver goes to $500.00 and Gold goes to $6000.00. Then what do I do sell my Gold and Silver and stick my profit in my pocket? If that happens and the Dollar plunges and inflation soars what have I accomplished?

Behind every currency is a government and its monetary policy reflecting accounting practices and global financial goals. These are the 'values' which will influence and affect a currency in the financial markets. These are based on 'rights' as much as economic considerations. Trading in 'money' without considering the complex decision making process of governments [creator and protector of 'rights']could prove problematic or worse.