We've talked before about the importance of support and resistance when looking at a stock chart. Back in October, I called it a trader's "Swiss Army knife" and one of my go-to technical indicators. And we touched on it briefly again last week when I told you about Japanese candlestick charts.

Needless to say, support and resistance come up a lot during the normal course of options trading. They are incredibly important indicators of where a stock price might (or might not) be headed.

Today, we're going to take a look at another way you can use support and resistance to identify potentially profitable options trades.

If a stock trades consistently between two parallel trend lines - support and resistance - over a period of time, this is called "channeling." When a stock trades in a channel consistently, a trader can benefit by recognizing a stock's behavior in the channel. As long as the stock continues this pattern, traders can milk this technical pattern for all it's worth.

When traders or investors hear the term channeling, they probably visualize a stock that is trending sideways, creating a horizontal support and resistance line.

This is known as a horizontal channel, and while it's a common type of channel, it isn't the only one. Stocks trading in a channel are not necessarily range-bound - stocks can also trade in ascending and descending channels (we'll talk more about those later this week).

With that in mind, let's take a look at an example of a horizontal channel. 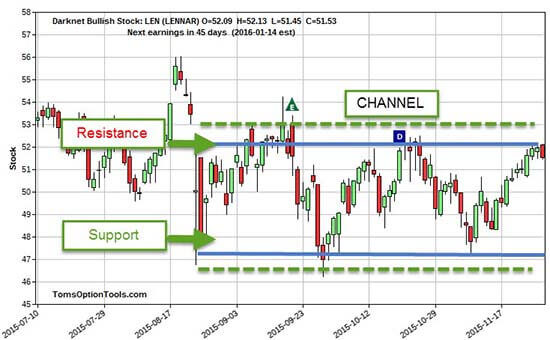 The parallel, horizontal green-dotted lines are the extremes of a channel on Lennar Corp. (NYSE: LEN). The solid blue lines are a bit tighter of a channel where support is shown around $47.50 and resistance is shown at about $52.

It is rare to see a channel that trades exactly to the same support and resistance levels, so this is where technical analysis can be more art than science.

I'd be wary of trading options on a stock with a range less than 2 points if the stock is $20 or more, as the options may not have that great a chance to double.

Keep in mind the range of the channel compared to its stock price, though, as a $0.70 roll range on the channel for a $5 stock is a 14% potential return on investment (ROI) on the stock alone. And if it can do this on a monthly or six-week basis, that could present a fantastic opportunity.

How to Trade the Channel