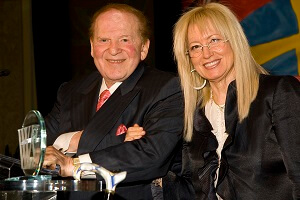 Business magnate Sheldon Adelson and his wife Miriam were granted the Woodrow Wilson Award for Corporate Citizenship on March 25, 2008.

Billionaire casino magnate Sheldon Adelson has held presidential forums in almost every election cycle since 1988. His famed Republican Jewish Coalition forum is the only event that has cyclically attracted every single candidate into one room, with the exception of official debates.

But at the top of the list of people the candidates want to impress is Sheldon Adelson himself.

To understand what makes his support so important, you have to know the answer to the question: Who is Sheldon Adelson?

There's more than money to this donor...

Who Is Sheldon Adelson?

A Quick History of Adelson's Fortune: Sheldon Adelson - business magnate and philanthropist - is the creator of the Computer Dealers Expo, also known as COMDEX. Adelson used his expo in the late 1970s to host and market computer brands International Business Machines Corp. (NYSE: IBM), Apple Inc. (Nasdaq: AAPL), and Microsoft Corp. (Nasdaq: MSFT) just as they were starting out in the industry.

By 1987, COMDEX had become the largest trade show in Las Vegas, grossing over $20 million annually. By the end of the decade, COMDEX had expanded shows into other countries. Sheldon Adelson's net worth now sits around $250 million.

At the same time in the late 1980s, Adelson started looking for a hotel property to complement the companies COMDEX attracted. In 1988, along with his partners in business at the time, he purchased the legendary Sands Casino for $128 million.

In 1995, Adelson sold COMDEX to a Japanese firm for $860 million, with a personal share of over $500 million. The transaction provided Adelson with the freedom to build a casino of his own, the $1.5 billion Venetian Resort Hotel Casino, as well as the Sands Expo and Convention Center.

Not long after establishing himself in the world of casino royalty, Sheldon Adelson dived into the world of politics - where he'd make a big splash...