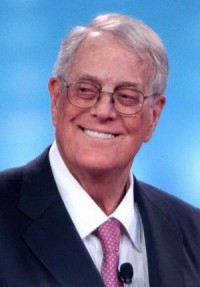 David Koch speaking at the Defending the American Dream Summit in Columbus, Ohio, in August 2015.

David Brock oversees an anti-Koch brothers operation known as the Bridge Project. Yesterday, The Hill reported that Brock's not-so-clandestine venture has "moles" in the billionaires' empire. These moles have allegedly been gathering information on Koch political and corporate activities. And everything they find is fed back to Brock's team, lying in wait.

David Koch speaking at the Defending the American Dream Summit in Columbus, Ohio, in August 2015.

But if, like us, you were compelled to determine exactly what it is Brock has on the Koch brothers, prepare to be disappointed.

The "Proof" of Informants at Koch Brothers Industries

David Brock's Bridge Project hasn't physically produced much proof of what it's purportedly obtained from behind the mysterious doors of the Koch Empire.

Here's what they've presented so far:

And that's it. None of the leaked content featured recordings or documents average folks couldn't have uncovered themselves via the Internet. Nor did it reveal any sort of secret information.

One of Brock's associates at the Bridge Project, Eddie Vale, countered skepticism regarding this material by defending the importance of anonymity.

"This is the part I'm trying to keep vague," he said. "We get information from people in their network." Vale went on to explain that the informants are both current and former Koch Industries employees. He said the information they typically relay is done via word-of-mouth. Why? "Because I know they have crazy internal surveillance of their employees," Vale said.

That begs the question, what's the point in bragging about covertly implanted moles if you're worried about the Koch brothers' "crazy internal surveillance"?