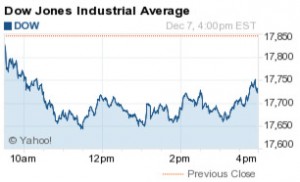 The Dow Jones Industrial Average fell 117 points today on news that oil prices fell to six-year lows as concerns about oversupply rattled trader sentiment. Shares of Exxon Mobil Corp. (NYSE: XOM) and Chevron Corp. (NYSE: CVX) were both off roughly 2.6% and were the biggest drags on the Dow Jones. Shares of Kinder Morgan Inc. (NYSE: KMI) fell another 2.4%.