Instead of fighting the hordes over Thanksgiving weekend - either online or at the mall - I found myself new car shopping.

While I figured my "ski mobile," a 2005 Acura MDX SUV, could last another two years or so, there I was, steering into a dealership about half an hour from the Robinson household.

And there I saw a brand-new 2016 MDX on the showroom floor.

What can I say? It called to me.

But what does this have to do with tech stocks - what I assume you're here for?

My inner "gadget geek" kicked in - and I had to take the MDX out for a spin.

And after cruising around and checking out some of the Super Handling advanced driver assistance systems (ADAS), I was hooked - and picked it up.

I'm far from alone. Millions of consumers cite advanced auto technologies as a key reason they're buying or leasing now.

Today, I'm going to show you how to profit from this massive trend.

No, I'm not recommending Acura (or any other carmaker).

But I've found a small, little-known firm whose technology is already in 25 million vehicles on the road today.

And that number's only going to soar as our cars and trucks advance further... 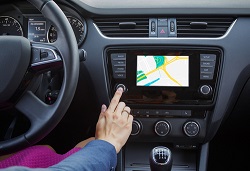 I've been following the car industry for decades.

Before I found my way to Silicon Valley, I was a top auto analyst in Detroit in the early 1980s. As such, I traveled the world to talk with senior industry executives, car dealers, plant managers, union leaders, and even everyday car buyers.

And I still follow the industry closely because cars are such a big driver of the global tech industry. That's because they're full of semiconductors, sensors, and software.

In my more than 30 years of following the industry, as you might expect, the emphasis on tech features has only increased.

We're in the middle of an auto sales boom that might end up the biggest in history.

November was the third consecutive month in which the domestic car industry had an annualized sales rate of 18 million cars - the highest such rate ever.

The industry analysts at TrueCar Inc. (Nasdaq: TRUE) and Edmunds.com Inc. say it would take a very weak December for the industry not to beat the record it set back in 2000, when U.S. auto dealers sold 17.4 million cars and trucks.

Not only that, but here's what I think.

Even if the U.S. Federal Reserve raises rates this month, as many expect it to do, car sales will increase even further next year.

I'm not alone in this prognostication.

Technology is playing a major role in this boom in auto sales.

Earlier this year, The New York Times analyzed the new-car boom and said high tech has become an irresistible lure.

According to the Times, consumers are now leasing in record numbers so they can keep pace with the technology. Leasing now accounts for 27% of auto "sales," up 18% from just two years ago.

"The automobile is evolving from just a machine to take people where they need to go," the Times reporter wrote, "to a 'smartphone on wheels' that is as much about the tech experience as the driving itself."

I'm also a big Acura MDX fan. Just turned 292K and this 2001 keeps on ticking. Going to give it to my niece as her first car. Thanks for the great insight on Harman. I remember the superb speakers they produced back in my high school days of loud rock music. Will look into this farther.