Some of the next best tech picks to add to your portfolio will be driverless car stocks.

Growth in driverless car technology has already started - but will really take off over the next 10 to 20 years as vehicles become more "connected."

"The car is going to become a computer on wheels," NVIDIA Corp. (Nasdaq: NVDA) CEO Jen-Hsun Huang told The Wall Street Journal in March. "This is going to be a large business."

A Boston Consulting Group report in April estimated that the global market for driverless car technology will skyrocket to $42 billion by 2025 and then nearly double to $77 billion by 2035.

For the strongest driverless car stocks, think smaller - as in the semiconductor industry.

Why Driverless Cars Are a Huge Opportunity for Chipmakers

Not many people realize how pervasive technology already has become in automobiles. Today the typical car contains about $334 worth of semiconductors. 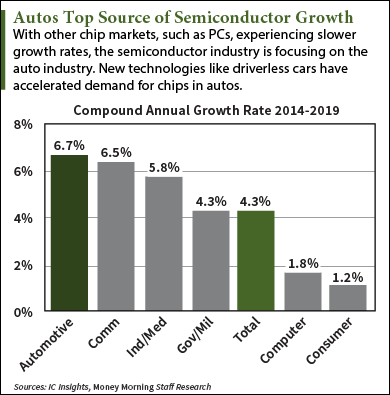 And it's expected to rise steadily over the next few years. Research firm Gartner forecasts that figure will grow to $368 by 2018.

But new technologies, such as hybrids, electric cars, and driverless cars, require a lot more high-tech chips. For example, a hybrid electric car today contains about $600 worth of semiconductors.

Driverless car tech is just starting to find its way into new car models. Semiconductor Manufacturing and Design estimates that partial automation will add another $100 worth of chips to an auto. A partially automated car can control and combine at least two primary functions, such as cruise control and lane centering.

Driverless tech growth definitely has the attention of the semiconductor industry. Chipmakers see rising tech demand from the auto industry as a way to compensate for slowing growth in the PC and smartphone markets.

It was a major factor in NXP Semiconductors NV's (Nasdaq: NXPI) decision to buy Freescale Semiconductor Ltd. (NYSE: FSL) for $11.86 billion in a deal that closed yesterday (Monday).

With Freescale on board, NXP's auto-related sales will double to 40% of total revenue. It also makes NXP the No.1 supplier of automotive-related chips in the world, vaulting it ahead of Tokyo-based Renesas Electronics Corp. (OTCMKTS: RNECY).

But NXP is just one of several driverless car stocks that will cash in on this trend. Here's the rest of the list...