Election 2016 News: How Trump Would Prevent Domestic Terrorism - Republican presidential front-runner Donald Trump wants more U.S. citizens to arm themselves. At a Dec. 5 rally in Iowa, Trump told his audience that if the San Bernardino victims had guns, they could have stopped the two shooters. He had similar reasoning for the recent terrorist attacks in Paris. Trump emphasized to the crowd in Iowa that he was "the biggest of all supporters" of the Second Amendment. 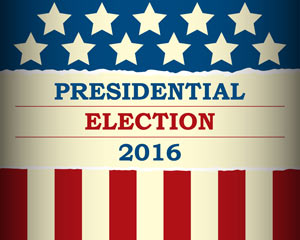 Trump supports increasing surveillance on some groups in the United States. After the Paris terrorist attack, Trump said the U.S. government should monitor suspected terrorists through a "watch list." Many were unsure what Trump meant by "watch lists," because the United States already has surveillance lists for suspected terrorists and criminals. Recently, Trump said he wants a database for all Syrian refugees, according to PolitiFact.

On Dec. 7, in perhaps one of his most controversial moves, Trump said he wants a "total and complete shutdown" of Muslims entering the United States.

"Until we are able to determine and understand this problem and the dangerous threat it poses," Trump said, "our country cannot be the victims of horrendous attacks by people that believe only in jihad, and have no sense of reason or respect for human life."

Trump believes the United States' greatest terrorism threat is "radical Islamic extremism," a term that he continues to criticize President Obama for not saying.

Election 2016 News: How Clinton Would Prevent Domestic Terrorism - Democratic presidential front-runner Hillary Clinton suggests a technical approach to preventing terrorist attacks on U.S. soil. She said that Silicon Valley and the U.S. government should work together to fight terrorism threats, such as ISIS, online. "They (ISIS) are one of the most effective recruiters in the world," Clinton said at a news conference. Clinton said she thinks big tech firms can help disrupt terrorist propaganda on the web.

Clinton believes regulating guns would greatly reduce domestic terrorism plots. She wants to have comprehensive background checks for gun owners and limit the freedom of liability from gun sellers. She believes that it's too easy for criminals to purchase guns in the United States. 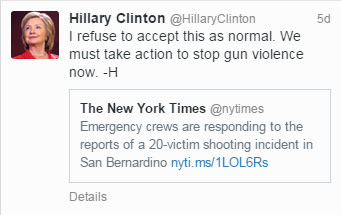 I am really disappointed in the Republicans and a lot to the media. Don't they know how negotiations work?
Donald trump is taking NEGOTIATING positions. He's not campaigning in the same way we're accustomed to hearing politicians campaign. He knows he won't get everything he pushes for. The radical liberals are in charge; their positions are OUTRAGEOUSLY liberal – they want EVERYTHING their way. Whenever we encounter anyone in business who is radically their way, we insist on everything being radically our way, It's just a starting point.
It is simply the way we begin negotiations with a radical.
I'd disappointed that Paul Ryan, Bill O'Reilly, Megan Kelly, and a whole bunch of other people aren't wise enough to recognize this.
Donald Trump is a negotiator, not a politician. That doesn't mean he won't be a good president if he is elected. It doesn't mean he will be a good one, either, but good negotiating skills might be helpful for the country in several ways.
But it sure would be helpful if people would wise up enough to realize what is really going on.

As a 44 year Attorney ,I am totally disappointed with Megan Kelly. I was surprised to hear her comments with Bush when it became apparent that neither of them heard all of his comments where he suggested a pause in Inmrigration of all Muslims coming into America until there is a way to vet them to insure they aren't terriorist . All terriorist are Muslins. Barack Hussin Obama is a Muslim following in the footsteps of his father and stepfather and he attended Muslim schools!What do you think the Koran says to do with Christians and Jews?

Uhhhhh … hey Ms. "Dewey Defeats Truman" …. what makes you think Sanders is NOT a front-runner.