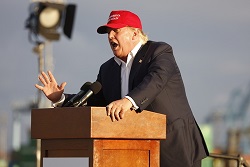 Presidential candidate Donald Trump speaks at a rally aboard the battleship USS Iowa in Los Angeles, Calif., on Sept. 15, 2015.

Donald Trump topped polls for much of 2015, in part because his clear position on the Islamic State resonates with many Americans.

Last month, a Washington Post/ABC News poll showed that nearly 60% of those surveyed believe the nation is "at war with radical Islam." And a Reuters/Ipsos poll taken last week revealed that voters view the Republican Party as having a better plan to combat terrorism than Democrats, 35% to 20%.

Donald Trump Quotes on ISIS No. 1: The billionaire said he'd "bomb the s—" out of ISIS in a rally in Fort Dodge, Iowa, on Nov. 12. You can watch the video of his remark below, and here it is transcribed:

"ISIS is making a tremendous amount of money because they have certain oil camps, certain areas of oil that they took away. They have some in Syria, some in Iraq. I would bomb the s— out of 'em. I would just bomb those suckers. That's right. I'd blow up the pipes. … I'd blow up every single inch. There would be nothing left. And you know what, you'll get Exxon to come in there and in two months, you ever see these guys, how good they are, the great oil companies? They'll rebuild that sucker, brand new – it'll be beautiful."

Donald Trump Quotes on ISIS No. 2: Trump announced his candidacy in the 2016 presidential election on June 16 with the brazen tone that's intrinsic to his brand. He wasted no time laying out his strong feelings about the Islamic State…

Donald Trump Quotes on ISIS No. 3: "I would do things that would be so tough that I don't even know if they'd be around to come to the table. … I would bomb the hell out of those oil fields [in Iraq]. I wouldn't send many troops, because you won't need them by the time I got finished." Trump on his strategy for dealing with ISIS, in a July 8 interview with CNN's Anderson Cooper.

Donald Trump Quotes on ISIS No. 4: On Nov. 16 – the Monday following Friday's tragic terrorist attacks in Paris – "The Donald" said ISIS headquarters in Syria should have been hit harder…