As I showed you last week, stocks (and other underlying securities) can often trade between support and resistance for sustained periods of time. When this happens, the underlying is said to be in a channel. Channels are helpful tools for planning options trades because they allow you to predict how a stock will behave and pick your options accordingly.

While channels can and do last for weeks and months at a time, all stocks, ETFs, futures, and commodities will eventually break out of a given channel.

But how do you know when an underlying is about to break out?

And - more importantly - how can you profit?

A breakout can occur to the upside or the downside. If the stock trades above and can sustain the price move above resistance, it's called a breakout.

If the stock breaks below and can sustain the price move under support, it is called a breakdown.

When I say "sustain the price move," I am referring to the stock trading above or below and staying there a day or two or three. Because occasionally a stock will trade above resistance or below support for a day before falling back into the channel. That is referred to as a false breakout. 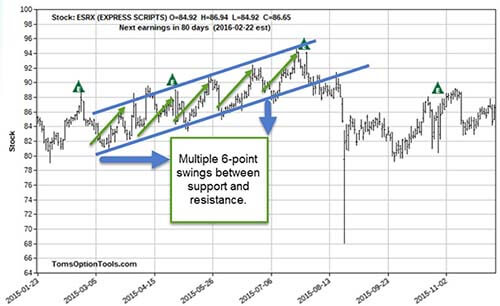 Now, I tend to look at everything through the prism of an options trader. Which means I'm looking for the underlying to make a particular price move within a predetermined amount of time in order for my options trades to work.

So when you've identified a possible breakout or breakdown, you want to keep in mind that the anticipated move in either direction is roughly equivalent to the range of the channel. If the stock was making a six-point move (as in the Express Scripts Holding Co. [Nasdaq: ESRX] chart above) between support and resistance while in the channel, it's likely that it will make a similar move to the upside or downside (depending on whether you've identified a breakout or a breakdown) when it moves outside the channel.

It is also likely that the price action outside of the channel will mirror the price action inside the channel when it comes to the time it takes to make the move. As you can see, it takes between two and two-and-a-half weeks to move from support to resistance, so you're going to want options that expire between 30 and 45 days to give them time to work.

I'll show you how all this works in just a moment...

Using Volume to Confirm a Breakout

The price move has a much better chance of being sustained - and becoming a true breakout rather than a false one - if it's backed by a surge in volume. A spike in volume indicates that traders believe that the underlying will hold at these new levels, and it's a positive sign that the stock is in fact breaking out.

If the stock makes its break on low volume, it may very well trade back into the channel. If you make a trade on a false breakout, you'd want to set your stops for when the price heads back into the channel rather than wait for it to trade down to its previous support level. That will help you preserve capital.

One more thing to keep in mind...