There are lies, and then there are Donald Trump lies.

Even in the realm of politics, Trump's endless stream of whoppers is extraordinary. This isn't the usual political fudging or mild exaggeration. Many Donald Trump lies are blatantly false. 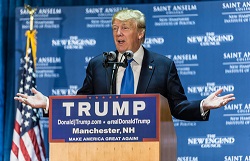 That raises some big concerns, mainly whether America could elect such an over-the-top liar as president.

It's also suspicious that Trump, a smart business executive, is so badly misinformed. It's likely that he knows better in most cases, but tells outlandish lies to get media attention.

Certainly, six months' worth of Donald Trump lies have not hurt him in the polls, and may even have added to his support.

That's because Trump typically lies about hot-button issues like immigration, terrorism, and the failures of the U.S. economy. He may be lying, but he's telling his supporters what they want to hear.

Since announcing his presidential candidacy in June, Trump has kept the nation's fact-checkers extremely busy.

And he consistently gets the worst ratings of any of the presidential candidates. Three out of four of the Trump claims checked by Politifact were rated "Mostly False," (13%) "False," (40%), or "Pants on Fire" (22%).

Here are the worst Donald Trump lies since his campaign began…

Donald Trump Lies No. 1 – Cheering Muslims in New Jersey on 9/11

In a November speech, Trump claimed to have seen "thousands and thousands of people cheering" in Jersey City, N.J., as the World Trade Center towers fell in the 9/11 attacks. On ABC's "This Week," Trump repeated the claim, adding that Jersey City had "a heavy Arab population." Except it didn't happen. The video Trump claims to have seen doesn't exist. At best, a handful of Muslims may have celebrated on rooftops. But there were no crowds of cheering Muslims in New Jersey on 9/11.