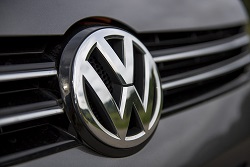 Today's rally for the Volkswagen stock price came after the company announced late Wednesday that it doesn't expect the emissions scandal of 2015 to affect earnings as much as once anticipated. The company didn't offer specifics, except that the $2.2 billion figure initially estimated may be too high.

Even if the earnings damage is less than anticipated, Volkswagen still has a major problem. And the fines, lawsuits, and the large blot on VW's once-stellar reputation will plague the automaker next year and beyond.

In September, Volkswagen admitted that as many as 11 million of its diesel vehicles worldwide had software that could cheat nitrogen oxide emissions tests. The company will need to recall some 500,000 cars in the United States and about 8.5 million in Europe.

The scandal has already put a serious dent in VW's sales worldwide and greatly impacted the Volkswagen stock price:

The smaller drop across Europe could be due to the fact that cars in the region are ordered ahead of time and delivery often takes months. So cars registered as sold in November were actually ordered well before the scandal was made public.

The Volkswagen stock price has fallen 28% in 2015, even with today's rally. And VW stock will keep sliding from here.

That's because more damaging news about the scandal continues to surface...