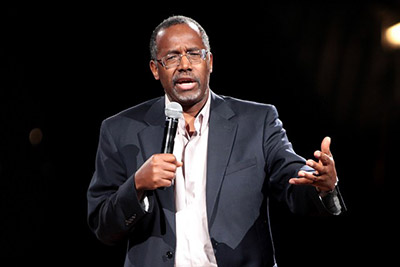 Dr. Ben Carson speaking at a special presentation for his potential candidacy at Grand Canyon University in Phoenix, Ariz., on Jan. 29, 2015.

Here are 10 Carson remarks at the center of the good doctor's biggest dust-ups...

10 of the Most Controversial Ben Carson Quotes

Most Controversial Carson Quotes No. 1: "I mean, [our society is] very much like Nazi Germany. And I know you're not supposed to say 'Nazi Germany,' but I don't care about political correctness. You know, you had a government using its tools to intimidate the population. We now live in a society where people are afraid to say what they actually believe."  (From a speech at the New York Meeting - a national gathering of elected officials, journalists, business leaders, and conservative authors - in March 2014.)

Most Controversial Ben Carson Quotes No. 2: "You know, Obamacare is really, I think, the worst thing that has happened in this nation since slavery. And it is slavery in a way, because it is making all of us subservient to the government." (During the conservative Value Voters Summit in October 2013.)

Most Controversial Ben Carson Quotes No. 3: "I think the likelihood of Hitler being able to accomplish his goals would have been greatly diminished if the people had been armed." (In an interview with CNN's Wolf Blitzer on Oct. 8, explaining his views on gun control.)

Most Controversial Ben Carson Quotes No. 4: "My own personal theory is that Joseph built the pyramids to store grain. Now all the archaeologists think that they were made for the pharaohs' graves. But, you know, it would have to be something awfully big if you stop and think about it. And I don't think it'd just disappear over the course of time to store that much grain." (1998 Andrews College commencement address.)

"Jesus will KILL everybody who does not worship on Saturday" is his worst belief and nobody will cover thatd.

What this article means is that the author is bending to political correctness which is killing this nation, in short the author is a follower. He or she follows the direction of the wind and not what is the right thing to do. Being a leader means saying the things that people dont want to hear, like Martin Luther King Jr. but saying them anyway sometimes costs you ridicule or your life. Thank God for leaders like King and Carson, who say things that some people don't like, setting an example to all who thirst for true leadership and not weak minded writers of articles that people that continue to beat the drum of ignorance.

Orson Wells saw right: 1984 and citizen Kane. And Nostradamus claims we will be fighting against a China-Russia-Arab coalition. We're heading that way, after what Russia and China claimed about knowing more precisely about the world problems than the U.S. And it's no secret for anyone anymore that governments all around the world will take away paper currencies for electronic transfer payments. Mr. Carson says things in a different way, but all I understand is that he talks without filtering his thoughts. You may think what I bring forward makes no sense, but just about anybody can say anything, but it only reflects how they conceive events.

@Russell Earl Kelly. Wow as if you saying it makes it true – especially with the captions ROFL… talk about a complete twist and lack of context – Carson did Not say that. Thanks for joining the throng of 'disinformation bloggers'. Your contribution is less than helpful at such a time for America and not in the least convincing… maybe next time huh?… good luck with that.

I see "controversial" quotes from Carson & Trump…. I guess Clinton has never said anything "controversial" since she is not listed. Makes me wonder just how independent this newsletter really is.

We aim to please:

Dr. Carson is correct in all his "controversial" statements. The Obama Administration and liberal ideology have seriously subverted our country. I hope Dr. Carson will win the election and surgically remove that cancer from our land.