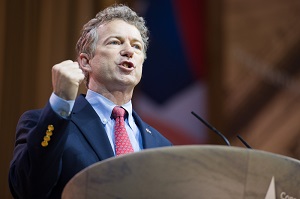 GOP presidential hopeful and Kentucky Sen. Rand Paul took to Twitter on Wednesday to respond to the White House's recent suggestion that Republican front-runner Donald Trump be disqualified from running.

Earnest continued: "And any Republican who's too fearful of the Republican base to admit it has no business serving as president either."

Wake Up People ! OBAMA" He's For The N.W.O. So Is The Election , Is Ridged , For Only Appointed People , By The ELITE , Look At The Pattern " Bush'es ,Clinton's ,& Muslim Bro President OBAMA. The Illuminati ,The Mason's ,Builder Berg Group , Rockefeller , And Lord Know's What Other Devil Run's The Show .Trump Is The Best For The Race ,He Don't Brown Noise No One .

Hello, you made a great point but do not say "he don't brown nose no one". The liberals will say this guy is obviously ignorant as he cannot write in a grammatically correct manner. Say "he does not brown nose anyone."

I agree with Rand Paul. Obama has no business suggesting someone else is not eligible for the presidency as he has shown himself to be totally incompetent at every turn. Everything he's touched has been a disaster.

I agree with Mr. Rand Paul's tweets which disqualify Obama from presidency. But in the case of Mr Trump, I agree with all the points that he has confronted our countries representatives on, that are making us a nation of failure. I think he has a strong need for learning tact for making his point and diplomacy to make the next debate successful.

Dr Ron Paul says it very well, it's fair to say so would his son, don't think there will be a rate hike tomorrow, the Fed has been misleading the public too long, if all is well and economy is growing than they must raise rates, they can't! They won't it will expose the truth.

I THINK WE NEED TO TAKE A CLOSER LOOK AT DR. BEN CARSON. HE HAS A BRILLIANT MIND THAT WAS AWARDED THE HIGHEST HONOR FOR ROTC IN HIGH SCHOOL [ EVEN THOUGH HE ENTERED A SEMESTER LATE ] SHOWING HIS ABILITY AS A MILITARY LEADER. HE SAID HE WOULD SEEK THE ADVICE OF OUR TOP MILITARY ADVISORS [WHICH IS THE OPPOSITE TO OBAMA WHO FIRED OUR TOP MILITARY ADVISORS WHEN THEY WOULD NOT AGREE WITH HIS UNINTELLIGIBLE KNOWLEDGE OF MILITARY AWARENESS OF CRITICAL SECURITY ISSUES. FURTHER MORE DR CARSON IS A VERY DEVOTED CHRISTIAN THAST HAS WRITTEN BOOKS ABOUT OUR… Read more »