Timing is everything, especially in options trading.

When you're trying to get into a trade, a few minutes can be the difference between getting in at the price you want and your targeted options getting away from you completely.

And when you're already in a trade, those same few minutes can also be the difference between banking 100% profits and watching your options reverse course and turn against you.

Today, I'm going to show you an indicator that will let you get in and out of your options trades before the rest of the investing herd.

Moving average convergence divergence, or MACD (pronounced Mac-D), is a popular momentum indicator that traders use to measure the strength and duration of a trend.

Many refer to it as a trend-following momentum indicator, but it can also be used to signal a possible end to a trend and a reversal in the underlying price – and those signals are where you can use this indicator to your advantage to get in and out of your trades ahead of the trend.

Before I show you how to do that, let me give you a brief explanation of how the MACD is formed and how it can show the strength or lack of strength of a trend.

How the MACD Is Formed

The MACD has two lines plotted on the chart.

The first line is the MACD line. It's formed by subtracting the 26-period exponential moving average (EMA) from the 12-period EMA.

The 12-, 26-, and nine-period numbers are the typical default of software programs when plotting the MACD. It can be shortened or lengthened to your liking, but this is the standard across the board.

Take a look below… 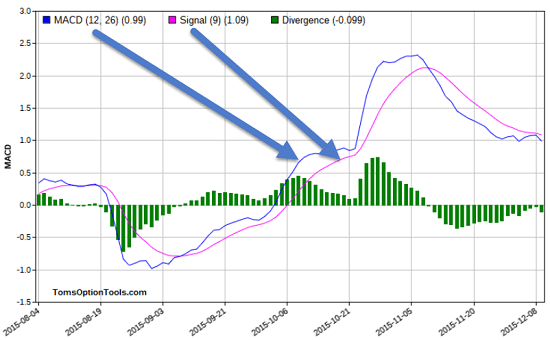 The blue line represents the MACD line and the magenta line is the signal line. The distance between the two lines indicates the strength or weakness of the trend.

Momentum and Strength (or Lack Thereof)

When the stock is in an uptrend, the MACD line should be over the signal line, and when the stock goes up too high too fast, you will see the widest separation between the two. That indicates strength in the uptrend.

In a downtrend, the MACD line should be below the signal line, and the farther and faster the stock declines, the wider the separation between the two. That shows strength in the downtrend.

When the stock is in a sideways trend, the MACD line and the signal line are flat and usually pretty close to each other. That's an indication that the trend of the stock is weak. 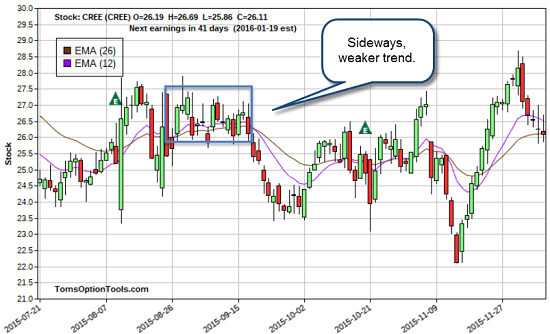 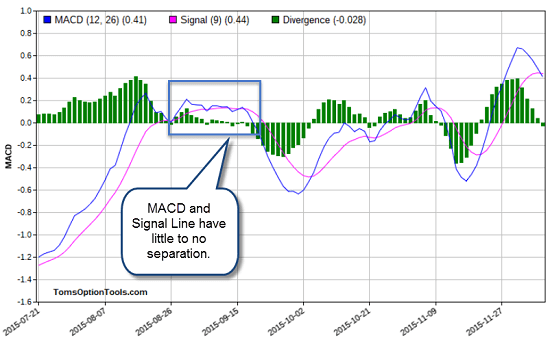 Crossover of the Zero Line

I prefer to try and be in my trades sooner. Let me show you why…