The Dow Jones Industrial Average for Monday slipped 20 points in its opening hour ahead of the U.S. Federal Reserve's big meeting this week. Analysts and media gurus are claiming that this is it – the week that the Fed is finally going to end its zero-interest-rate policy (ZIRP) and hike interest rates for the first time since 2006. Will Chairwoman Janet Yellen pull the football away at the last second as investors prepare to kick off 2016? Check back for coverage on the FOMC meeting all week. 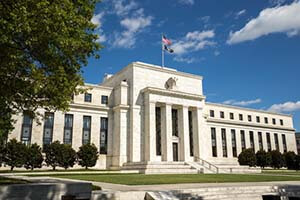 On Friday, the Dow Jones Industrial Average closed down 310 points to close at 17,264.21. The Dow cratered as much as 330 points in trading. Crude oil prices fell to levels not seen since December 2008. Oil broke below $36 per barrel. All 10 S&P sectors fell on Friday by more than 1.1% with energy and materials stocks sinking the most.