The U.S. Federal Reserve’s two-day policy meeting starts tomorrow, so it’s time to look at what impact a rate hike will have on silver prices.

To fully understand this, let’s look at how silver prices are tied to rates. 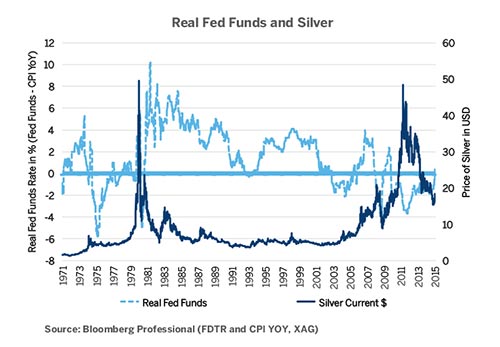 This upcoming rate hike will be different.

The Fed is expected to raise rates by only a quarter of a percentage point, so this shouldn’t put much negative pressure on silver prices.

“A rate increase of 0.25% in the fed funds rate has already been talked about for so long that it's mostly baked into prices now," said Money Morning Capital Wave Strategist Shah Gilani. "This won't be a market buster."

Right now the silver price is trading at $13.80 an ounce. In the near term, silver prices may decrease to $10 an ounce after the December rate hike, according to CME Group. For the long term, Money Morning Resource Investing Specialist Peter Krauth expects silver to remain a dependable store of wealth.

“Remember, silver is an industrial metal as well as a monetary metal,” Krauth said. “At various points in time, it may tend to act more like one than the other. But as gold resumes its role as a store of wealth, I expect silver will not only tag along, it’s likely to outperform.”