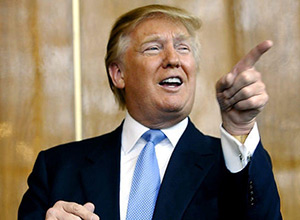 Donald Trump went into the fifth GOP debate leading polls with his widest margin yet.

It's the morning after the fifth GOP showdown and the big question is: "How did Trump do in the debate?"

That's because this time yesterday, the real estate mogul was leading the Republican presidential nominee field with his widest margin yet. Monmouth University poll data released Monday revealed Trump had breached the 40% favorability mark (41%) - light-years ahead of the next-highest contender, Texas Sen. Ted Cruz, who now sits at 24%.

His performance last night will surely impact that lead, for good or for bad.

How Did Trump Do in the Debate?

The real estate mogul got 13:25 minutes of total speaking time, NPR reported this morning. He came in third following Cruz (15:58 minutes) and Florida Sen. Marco Rubio (13:33 minutes). This is different from the first two GOP debates in which Trump dominated the clock.

What the real estate mogul did get to say, however, was that he was "totally committed to the Republican party." That's a pivotal statement after rampant speculation Trump might consider an independent run should he fail to win the party's nomination.

"I've gained great respect for the Republican leadership," Trump said last night. "I feel very honored to be the front-runner."

Of course, you never know - Trump could yet change his mind.

The New York businessman was also subjected to attacks last night from former Hewlett Packard Enterprise Co. (NYSE: HPE) CEO Carly Fiorina. When asked by moderator Wolf Blitzer if it's better to leave Middle East dictators in power or to intervene in order to overthrow them, Trump bemoaned the resources the United States has already put toward such interventions. He said the trillions of dollars would be better spent here at home improving the country.

"I'm amazed to hear that from a Republican presidential candidate," she said. Trump brushed off her statement with his trademark shrug.

While this attack from Fiorina drew a mild reaction from the crowd - a few hoots and a spat of applause - the biggest verbal attack directed at Trump last night came from former Florida Gov. Jeb Bush...

Trump was horrible. Once again, he has no realistic plans to deal with any of the issues. His answers are always the same: we will put our best and brightest on it, we will make America great again, or just incoherent babbling. Hell, it was either Cruz or Rubio who actually had to explain to him what the nuclear triad was. I believe Trumps answer was something like "nuclear weapons, devastating, I'm all for them."

Do not commit too much period when you have none to extra.