Making short-term profits on reliable, long-term patterns is one of the smartest, most profitable moves a trader can make. We make plenty of money with these quick moves - and we can also use these patterns to establish a really lucrative trading strategy.

That's what I have for you today - an opportunity to set a profitable trading plan for 2016.

It's based on a market pattern I first showed you in August - and it's paid off in 74 of the past 75 years. It's called the "presidential pattern" and it's in full swing right now...

Get the Most Out of These Repeating Patterns

The human mind is wonderful at spotting repeating patterns. But it's important - really important - not to get fooled and to use hard data to back up and help establish what you believe to be a pattern. In the case of trading, there's a lot of money at stake - all the more reason to be very sure of what it is you're looking at.

I believe that there are a variety of reasons for this, but I'm certain it has little or nothing to do with party politics...

A new incoming administration tends to shake things up, to paint in bold strokes, and any new agenda can make waves in the news. The markets simply don't like uncertainty and change, and they respond accordingly.

On the other hand, during the end of a presidential term, a lot of lofty campaign promises start flying around, new public programs are announced, and the party in power takes steps to stimulate the economy in hopes that the public will remember that and stick with their "horse." Markets love sunshine and stimulus.

Just have a look at this simple chart. It measures the performance of the Dow Jones Industrial Average in every election cycle since the Johnson administration. 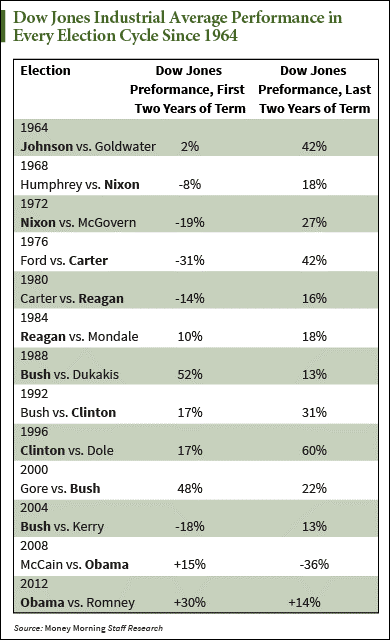 This pattern suggests a very simple, but potentially very profitable, strategy of buying a Dow tracker, like the SPDR Dow Jones Industrial Average ETF (NYSE Arca: DIA), on the first trading day of January in year four of the cycle until the last trading day in December of year four.

That's simple enough, but here's a way to do it for far less money, for far more returns - with far less risk.

A quick look @ your data would seem to indicate that 3 of the last 4 cycles contradict your position (Final 2-yr Dow increase is NOT greater than initial 2-yr). What am I missing?