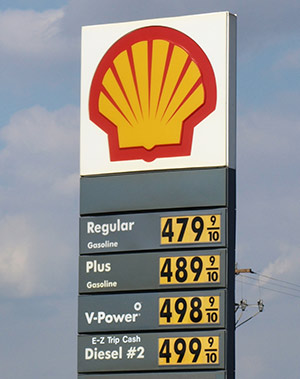 The Royal Dutch Shell stock price is hovering at a five-year low of $43.72 this morning (Thursday) as the oil giant fights the federal government over drilling rights in the Arctic.

On Dec. 15, Royal Dutch Shell Plc. (NYSE ADR: RDS.A) filed an appeal against the U.S. Department of the Interior (DOI), which oversees all environmental projects on public land. Shell is challenging the DOI's rejection of the company's request to extend the expiration dates of its Arctic oil leases. The leases are set to expire between 2017 and 2020.

Although the firm stopped exploration off the Alaskan coast on Sept. 28, it requested the extension in order to hold onto its territory without paying escalating annual leases.

Shell decided to abandon its $7 billion Arctic oil search after failing to find enough oil deposits to make the search worthwhile. The withdrawal came six weeks after President Obama gave final clearance on the project to the chagrin of Greenpeace and other environmental groups.

Since then, the Royal Dutch Shell stock price has fallen 4.7%. Today, it's down another 2% and trades at its lowest level since February 2009.

But there's one reason why the Royal Dutch Shell stock price will rebound in 2016...

Why the Royal Dutch Shell Stock Price Will Recover in 2016

The Royal Dutch Shell stock price will see big gains next year as the company reaps the benefits of mergers and acquisitions in the oil sector.

We already saw this last April when Shell made one of the biggest acquisitions in the history of the oil sector...

Last April, Shell bought BG Group Plc. (OTCMKTS ADR: BRGYY) for $70 billion. The deal marked the largest energy merger in over 10 years and will create one of the largest oil companies in the world.

"The Shell-BG [transaction] is the first clear megamerger option crossing the oil-gas division," Moors said after the deal broke. "We will see more of these as the new energy balance among a widening number of energy sources kicks in."

Analysts have already factored the deal into their Royal Dutch Shell stock price predictions. According to MarketWatch, the average one-year target price for RDS.A stock is $59.92 a share. That's 25.5% higher than yesterday's closing price of $44.65.

The Bottom Line: With one of its most expensive drilling projects currently in limbo, oil investors are wondering if the Royal Dutch Shell stock price will rebound from its multiyear lows. The European oil titan is sure to see a solid rebound in 2016 as its merger with BG Group finalizes and drives growth in the overall oil sector.

Shell didn't buy BG they made an offer. They may still not buy it, the shareholders haven't voted yet. I came here for news on the deal and it looks like you think it's already through!