I’m following “Disruptors” because I think they’re going to be a huge nexus of wealth creation (and destruction) in the coming years.

They’re causing monumental shifts in everything and changing our lives. In the markets, these Disruptors send huge capital caves into new paradigm businesses… and push big capital waves out of adversely disrupted businesses.

Marketplace lending, or P2P lending, is a perfect example of a Disruptor business.

I've written before about the issues marketplace lenders were going to have and how you'd be better off borrowing from a marketplace lending site than investing in any of them.

I don't want to say "I told you so," but I'm being proved right yet again.

Things aren't getting better for investors in what used to be called "peer-to-peer" lending.

So, if you want to get an online loan, go for it - but don't waste your money betting on any of the sites being a home-run investment.

For now, you should keep your capital away from marketplace lenders. 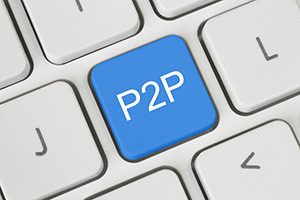 They're Disruptors precisely because they aren't banks, but act like banks.

The disruptive side of P2P lenders is upfront. It's in where borrowers go, which is online. It's in how borrower's creditworthiness is profiled, which is largely based on online access to things like payment histories and social media profiles. And upfront it looks like a borrower is borrowing from an online "peer."

That's upfront stuff. The back end of P2P lending is still about banks.

Disruptive P2P lenders need a bank to operate. And that's becoming a problem.

The Dark Side of "Conduit Banks"

When a lender agrees to fund a borrower's loan request online, the actual loan runs through a bank, usually a very small bank, more often than not located in Utah.

Why Utah? Because Utah doesn't have state usury limits or rate caps like other state-chartered banks have.

But conduit banks are coming under increasing scrutiny - as are lending sites themselves - with regard to cutting regulatory corners on customer information, antiterrorism, and anti-money-laundering regulations.

So under silverbullion does the borrower actually have to present his or her gold as collateral?

Yes, ALL P 2 P loans are secularized by gold bullion owned and allocated to the borrower at a ratio of 200% & stored in "Safe House", their secure private vault subsidiary. How can you lose with a fully secured loan of no longer than a two year duration??

Again, fail safe. Try finding a comparable, truly "risk free" return of around 5% elsewhere? You won't find it in U.S. or European financial markets. Asia is where the best arrangements are going to be in the future.