The Apple stock price got a small bump from the patent deal with Ericsson (Nasdaq ADR: ERIC) today (Monday) - but a bigger benefit is coming a couple of years down the road.

At first glance it looks like Swedish telecom equipment maker Ericsson made out better in the seven-year deal with Apple Inc. (Nasdaq: AAPL), which ends a yearlong dispute. 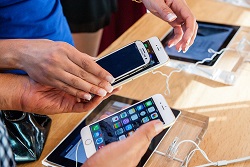 Apple agreed to pay Ericsson to license its 2G, 3G, and 4G-LTE technology in its iPhones and iPads. The deal is global and settles issues with the earlier technologies, as well as setting terms for the use of the current 4G-LTE standard.

Investment bank ABG Sundal Collier estimated that Ericsson will end up with about 0.5% of Apple's iPad and iPhone revenue.

I did the math to find out what that means for Ericsson. Based on that figure and fiscal year 2015 iPhone revenue of $155.1 billion and iPad revenue of $23.2 billion, the deal puts about $892 million into Ericsson's pocket annually.

If true, the deal would boost Ericsson's intellectual property 2014 revenue of $1.163 billion by about 75%. However, the company is projecting 2015 IP revenue of $1.52 billion to $1.64 billion, suggesting Ericsson isn't getting quite that much. But even half of Collier's estimate would add $446 million of IP revenue per year.

But in pre-market trading, the AAPL stock price rose as well - as much as 1.74% to $107.88. The Apple stock price went flat on the day by midmorning, falling in tandem with the broader market.

Still, it begs the question: Why would the AAPL stock price go up in the wake of news of a patent settlement that has the company forking over millions of dollars a year?

Here's what Apple gets out of the Ericsson patent deal...