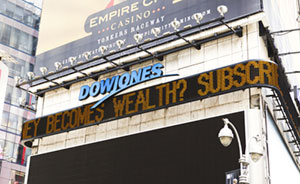 Futures for the Dow Jones Industrial Average today (Tuesday) suggested the market will open 22 points higher than yesterday on news that the U.S. economy expanded in the third quarter by 2%. The growth was slightly higher than economist consensus expectations.

On Monday, the Dow Jones Industrial Average added 123 points because of solid gains in large, multinational banking stocks. But the continued downturn in Brent crude oil prices - which hit an 11-year low - weighed down the energy sector. Oil prices have been plummeting because of a growing international glut and a rising U.S. dollar due to the Fed rate hike.