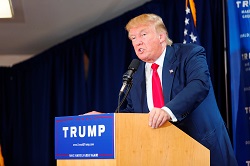 Trump at an early campaign event in New Hampshire on June 16, 2015.

Also according to this survey, Democratic presidential front-runner Hillary Clinton currently holds a thin lead over the real estate mogul, 47% to 40%.

It should be noted that the results of this particular Quinnipiac University poll exposed a bit of bias on its part: It reported that 63% of American voters say Clinton has "the right kind of experience to be president," while 67% reported Donald Trump does not.

Those surveyed were also asked another speculative question: Would they be embarrassed or proud to have President Trump leading the country?

Among registered voters overall, 50% said they would be embarrassed to have Trump as president, including 20% of Republicans, 47% of independents, and 82% of Dems.

Conversely, 23% of overall voters said they would be proud to have Trump as president. Twenty-four percent said they didn't care one way or another.

"Half of American voters say they'd be embarrassed to have Donald Trump as their commander-in-chief, and most Americans think he doesn't have a good chance in November, but there he is still at the top of the Republican heap," said Tim Malloy, assistant director of the Quinnipiac University poll.

Trump cant be brought .The Gop is afraid of him . Hopefully he does more good than harm .Get term limits on Congress ,no one else would have the balls to do it .

That's the problem she's got more experience in doing the wrong things. She shouldn't have been able to run for POTUS with all that she has done. She's evil and wicked and doesn't care about anybody but Hillary. She's proved that with Benghazi and many other things. If I had to vote for her I wouldn't vote. We need honesty, dignity, and good character in our W H not someone that goes against the grain of the Constitution and wanting to take our GOD GIVEN RIGHTS away as she does. She is NOT the person to lead this Country.

I am already feeling almost unbearable cognitive dissonance at the degree of support this ignorant, narcissistic, lying buffoon has garnered. If he actually became president, I would feel sick, horrified, and terrified for not only the U.S. but for the entire world.

Embarrassed is an understatment! I'm embarrassed to be an american period right now just with how our congress has acted towards our president in the last 7 1/2 years! Trump is a 4th grade bully trapped in a 70 year old body! His mentality is asinine! He is a misogynistic racist pig, and his running mate is just as bad!

If Donald Trump actually does what he says he is going to do for America, then I wouldn't be embarrassed to vote for him at all. At least he is honest. Too many people misunderstand some topics Trump speaks about because they read into his statements too much, therefore, what he is trying to say and what he really means is misconstrued.

I would be embarrassed to have Trump as my president.
He acts like a 12 year old bullie. He disrespects everyone… not only woman. He is a racist, and lies allot. I've never known anyone like him. He dosen't know what he's doing. He ripped inocent and loyal people…that worked for him at his casinos…and Trump U. He also was charged for child molestation, just because he has money he buys his way through everything. Everyone that's on their sick mind… would believe at all his false promises. I dont trust him.