As the following crude oil price chart shows, this has been the second-largest bear market for oil in the last 30 years…

The past 18 months have delivered one of the worst oil price crashes in history. WTI crude oil prices have plunged 67.4% since June 2014. Futures for February currently trade at a seven-year low of $37. 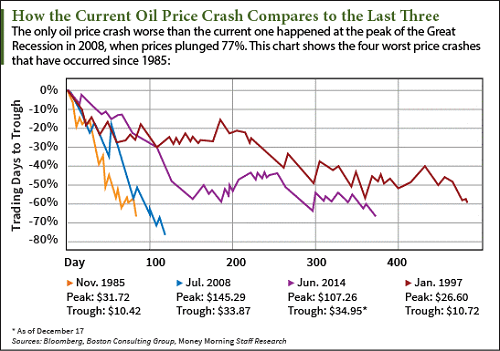 Although the current crash has been brutal, it still pales in comparison to the crude oil price crash during the Great Recession. WTI crude oil prices cratered 77% from July 2008 to the end of the year. They fell from $145 to below $34 during that time.

Another bearish period on the crude oil price chart similar to the current one came between late November 1985 and March 1986. That 67.2% collapse came after Saudi Arabia boosted production from 3.8 million barrels a day to more than 10 million in an effort to gain market share. Oil prices dropped from $31.72 a barrel to $10.42.

One of the longest crashes on the crude oil price chart occurred in 1997. WTI crude oil prices fell 59.7% from January 1997 to March 1998. It was the longest bear market period until the current price crash surpassed its 14-month record by four months.

With today's bear market for oil being one of the worst we've seen in the last 30 years, investors worry oil prices will never recover. Mounting U.S. supply levels have pushed prices lower and lower over the last month – and oil took another hit with the recent U.S. Federal Reserve interest rate hike.

But Money Morning Global Energy Strategist Dr. Kent Moors sees WTI crude oil prices bottoming out then rebounding in 2016. In fact, he sees the U.S. benchmark more than doubling its current price by the time Q4 rolls around.