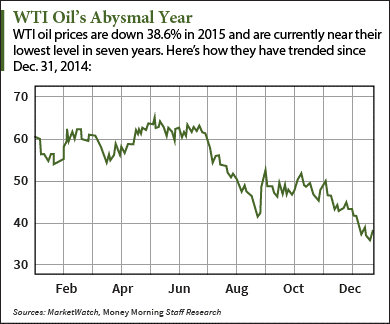 The Dow Jones Industrial Average today (Monday) slipped more than 23 points to kick off the final week of trading in 2015. Markets slumped thanks to a downturn in energy stocks and oil prices. The Nasdaq was off seven points today despite receiving a bump from shares of Amazon.com Inc. (Nasdaq: AMZN). The e-commerce giant's stock gained 1.9% on news it added three million new customers to its Amazon Prime membership in December.

In economic news, the U.S. saw a contraction in the Dallas Fed manufacturing sector, which is the heart of the U.S. energy industry. The sector remains under a severe economic crunch due to a sharp downturn in oil prices this year. Many markets around the globe were closed, including exchanges in England, Ireland, Australia, and Canada.