According to the likes of The Guardian and Business Insider, GOP presidential front-runner Donald Trump changed his stance on U.S. wages over the weekend.

In fact he didn't, but mainstream media was all too happy to jump in and say so.

It started with an attack Vermont Sen. Bernie Sanders fired at Trump on CBS' "Face the Nation" yesterday.

"[Donald Trump] has said that he thinks wages in America are too high," Sanders proclaimed on Sunday's broadcast.

Trump took to Twitter to defend his stance on U.S. wages shortly thereafter: 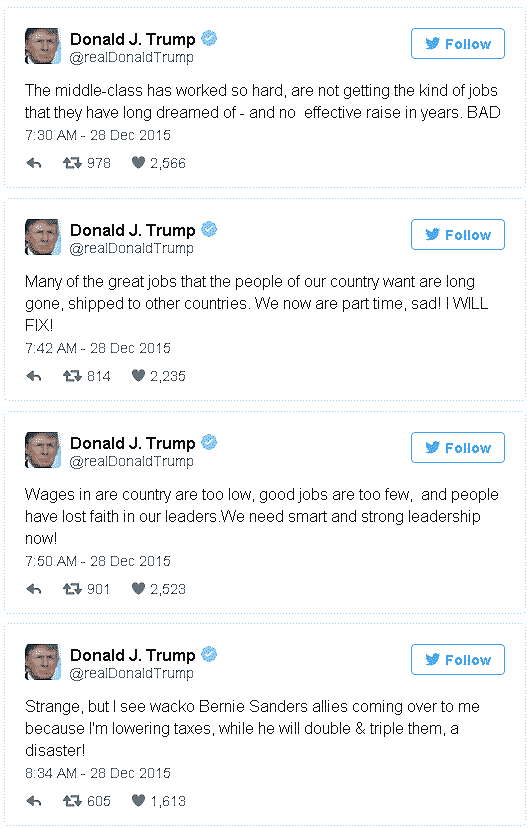 That's when the mainstream media stepped in to accuse Trump of "doing a one-eighty."

Business Insider published a piece this morning entitled "Donald Trump Changes Tune on Wages After Bernie Sanders Broadside." The Guardian claimed earlier today that "After Sanders Criticism, Donald Trump Flip-flops: 'Wages Too Low.'" And CNN posted the following: "Bernie Sanders: Why Trump Voters Should Back Me."

The truth is that Trump's wage comments have long been taken out of context – this is just another example.

Here is the real estate mogul's policy on U.S. wages, without media spin…

The Truth About Trump's Wage Comments

During Nov. 10's fourth GOP debate, Donald Trump claimed that "wages were too high." But he did so in response to a question about whether he was sympathetic to protesters who have been pushing for the minimum wage to be raised to $15 an hour. To which Trump replied, "I can't be… and the reason I can't be is because we are a country that is being beaten on every front." He then went on to say he believes taxes and wages are too high and, as a nation, we can't compete against the world.

GOP front-runner Donald Trump seems to grow more popular with every bombastic remark he makes. Does his knack for working an audience and garnering headlines make him the president we deserve?

The blowback from this comment was immediate, and media sources focused solely on the clause "wages are too high." Mainstream sources conveniently forgot the rest of Trump's opening remarks that night – which were as follows:

"I hate to say it, but we have to leave [the minimum wage] the way it is. People have to go out, they have to work really hard and have to get into that upper stratum. But we cannot do this if we are going to compete with the rest of the world. We just can't do it."

On Nov. 12 – two days after that debate – FOX News' "Special Report" host Bret Baier asked Trump about his controversial wage claims. Exasperated, the billionaire businessman again stated, "I didn't say that. Bret, we were talking about the minimum wage, and they said 'should we increase the minimum wage?' And I'm saying that if we're going to compete with other countries, we can't do that because the wages would be too high." He then repeated, "I was referring to the minimum wage."