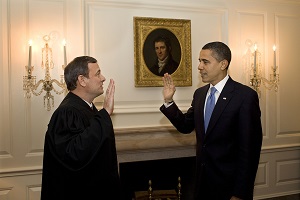 President Barack Obama was administered the oath of office by Chief Justice John Roberts a second time on Jan. 21, 2009.

In a 6-3 decision issued on June 25 – penned by Roberts – the high court delivered a conclusive victory to President Barack Obama. It upheld that the administration could legally hand out healthcare subsidies in all 50 states.

The decision in King v. Burwell shocked conservatives on Capitol Hill, who accused Roberts of betraying the party by fortifying the key component of President Obama's legacy.

Had Chief Justice Roberts been coerced into the decision?

There are two parts to this theory…

A Breakdown of the Obamacare Conspiracy Theory

On his June 25 broadcast, conservative radio host Rush Limbaugh urged listeners to check out this link and, from there, simply "follow the money." Limbaugh claimed the share-price increases were evidence that perhaps some in the Republican Party were more responsive to "money people" and "donors" over voters than others.

While Limbaugh added "I'm not accusing anybody of anything," he also maintained that "when you follow the money, a lot of questions that seem unanswerable become clear."

And then there was a more sinister scenario being tossed around…

Outstanding. I won't miss this one..