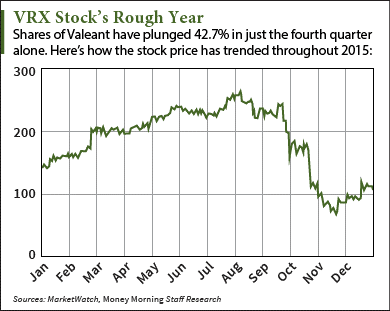 The VRX stock price plunged 10.5% yesterday (Monday), marking one of the stock's worst single-day performances of the year.

On Monday, shares of Valeant Pharmaceuticals International Inc. (NYSE: VRX) dropped after CEO J. Michael Pearson took a medical leave of absence due to severe pneumonia. Valeant's board created both a three-man chief executive office to temporarily lead the company and a committee to oversee the office.

Pearson has headed the pharmaceutical giant since 2008 and has been at the center of the firm's numerous controversies this year. Back in September, Valeant came under fire for hiking the prices of two commonly used heart drugs - Nitropress and Isuprel - by 212% and 525%, respectively. The move outraged congressional Democrats, who urged the House Committee on Oversight and Government Reform to subpoena Pearson to testify on the price gouging.

As a result, the VRX stock price has plummeted 57.8% since Sept. 18. It has fallen nearly 43% in just the fourth quarter alone.

With VRX stock down another 1.5% and trading just above $100 a share today (Tuesday), investors are wondering if the stock is bottoming out and ready to move higher next year...