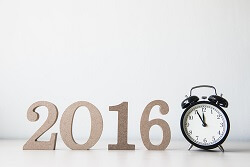 Futures for the Dow Jones Industrial Average today (Thursday) forecast a 72-point drop on the final trading day of 2015. As traders prepare for New Year's Day and the start of 2016, markets will close today at their regular hour – 4 p.m. EST. The markets will be closed on Friday, Jan. 1, and regular trade will resume on Monday, Jan. 4. Here's a breakdown of how you can become a better trader in 2016… if you just follow these very simple words of advice.