As usual, none of Wall Street's so-called "top strategists" in a recent Barron's survey are calling for stocks to decline in 2016. All of them are calling for the bull market to continue next year.

My own forecast practically puts me off this chart altogether.

Anyone who challenges the incessant bullish consensus is invariably accused of being a "permabear," but that moniker does not apply to me.

I learned a long time ago that my job is to take the world as it is, not as I would like it to be. That's the promise I make to my clients and to my readers. Sometimes that will mean I'm bullish, as I was in 2013 and 2014, and sometimes it won't, but it's always based on my assessment of the world - not hopes or prayers.

I figure if you want to feel cozy, you'll watch the pap that the financial news channels feed to their viewers to keep them tuning in and the advertising dollars rolling in. Of course, that didn't serve you well in 2015, and it certainly won't in the next 12 months. 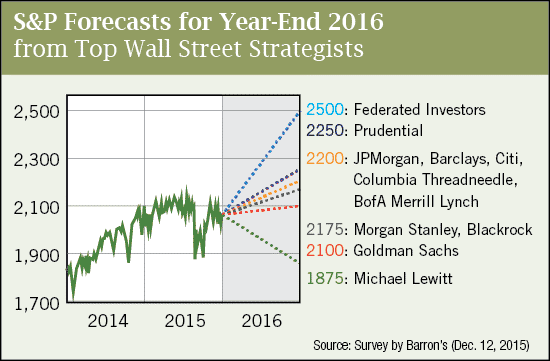 But in January 2015, after watching oil and the rest of the commodities complex collapse over the second half of 2014 in concert with China's slowing economy and the demise of the weakest segment of the high-yield bond market (CCC and B-rated bonds), I concluded that the end of the post-crisis bull market had arrived.

Having correctly called the credit crisis of 2001-2002 and the financial crisis of 2008-2009, I saw similar warning signs suggesting that investors should protect their assets.

I continue to believe that we are in a bear market and that 2016 will bring more pain, especially for investors who believe markets can defy the headwinds that buffeted them in 2015 and continue to blow hard.

I believe we're in a stealth bear market that began in late 2014 after China's economy began to weaken, the global commodity complex began to collapse, and the Fed signaled the beginning of its current tightening cycle with the end of QE.

I argued a year ago that the rule that bear markets do not begin without a recession or the Fed initiating an aggressive tightening cycle (which it clearly hasn't done and won't do) should be questioned at the zero bound.

I believe that market behavior has proven me correct; again, much of the market is already in a stealth bear market disguised by the performance of the cap-weighted indexes.

2015 was a tale of two markets. The so-called FANG stocks flourished:

But once you moved beyond these nine stocks, much of the rest of the market experienced a stealth bear market, and energy and commodity-related stocks crashed.

Market breadth is among the poorest in memory because it reflects the weakness in broad sectors of the economy including commodities, retail, and media, and the overall tepid health of the consumer.

Furthermore, investors seeking yield saw their capital eroded in large bond funds and experienced large losses in energy MLPs and junk bond funds. There were a lot of broken heroes on a last-chance power drive.

This year will be different. The continued strength of the U.S. dollar, a topic on which my brilliant friend Raoul Pal continues to be ahead of everybody else, will maintain downward pressure on commodity prices and U.S. corporate profits next year.

Rather than drag the market higher, I believe the FANG stocks will move lower and meet the rest of the market. (They are on my short list this year, which you'll see below; I am not saying they will crash, but they could easily drop by 20%.)

As we enter 2016, I am very bearish and want to make that very clear to you.

None of the factors pressuring markets are going away – China, commodities, and slow global growth are here to stay. I do not see a lot of one-year, short-term long plays. A big sell-off across the board is more likely than a rally in anything at this point.

The smartest people I know – with very few exceptions – are very bearish. Only the consensus and Wall Street, which is paid to be bullish, are trying to make a case for things going up.

If there is a Super Crash, it will turn into a deep recession because the Fed and other central banks are out of bullets. But I think it likely we may be looking at a multiyear bear market.

New Strategies and Pockets of Opportunity

The tired question that people keep repeating – “where else are people supposed to put their money?” – should be left to those without imagination or the ability to access genuinely talented managers, contrarian thinkers, or unique strategies.

Because the truth is, there are plenty of places to put your money other than stocks if you have the wherewithal to find them.

Of course, there are always pockets of opportunity – even in the stock market.

As you can see, I only have two long recommendations that are just stocks. The rest are gold-related, volatility-related, or mortgage REITs. 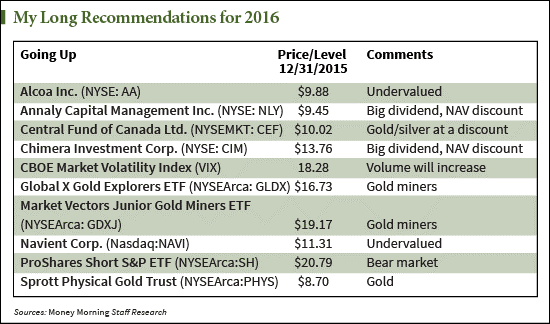 You’ll note that I’ve listed two gold mining long plays – having previously told you here that  miners were not a good way to invest in gold. These gold miners are a very leveraged bet on a recovery in gold and are so out of favor that they are worth a shot.

Further, I am recommending the exchange-traded funds (ETFs) rather than individual stocks to mitigate the individual operating issues associated with individual companies. These are long-term picks that could easily take more than one year to work out because gold is a multiuser play.

The short side, on the other hand, is ripe. Here’s what I’m recommending as a short. As always, I recommend investors use options to short stocks in order to minimize losses and maximize gains while using capital efficiently. 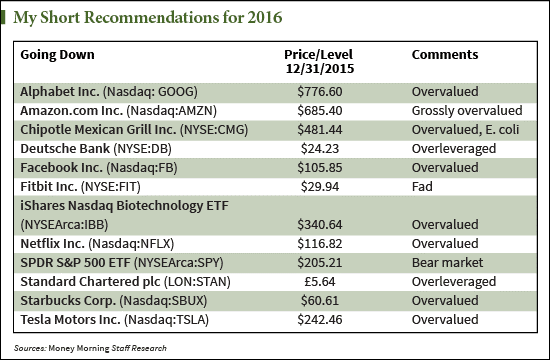 Despite the challenges ahead, it’s going to be a terrific year to be an investor. I’m glad you’re with me. Happy 2016.

The S&P 500 will hit at least as low as $1,653.08 below the 200 day MA before maintaining new highs. This number is based on a pattern I found and it is over a year over due. When the S&P hits this number start pilling in your money for long term. Let everyone laugh but this is happening.

Will you please explain "pilling" in your money?

In the early days of 2016 it was the best investmemt market analysis that I study in your newsletter. It was so interesting for me and i try to think about how to invest my money in the comming year. Thanks for all your help to the readers.

Thank you for your valuable insights into advice for Longs and Shorts for 2016. Even more valuable information we all currently need for back-testing involves a list of the best investments which had successfully weather the storms of past corrections and recessions since 1970. This is even more essential for those who are now retired and re-positioning their retirement portfolios for the event of a crash.

Hi,
I`m just wondering how a major credit/financial crash will be affected by the gov`t giving the banks the right to seize money from depositors` accounts, via the Dec 11/15 omnibus bill, in order to keep the banks from failing?
How do depositors protect themselves?

what to do with promising stocks like Sunedison, Nividia, etc
and Apple,
How much of a place is there for them?

Looking forward to 2016
Like the process you use to make your reccommendations solid.

instead of shorting the biotech etf, i buy the inverse etf.