Editor's Note: We're sharing this "crash trade" with you today because Shah's trading strategies have made his readers a lot of money in very similar situations before - like the time he made more than 400% twice in one day while stocks collapsed. His idea for trading this upcoming event has the same knockout potential. Here's Shah...

You've just got to love the junk bond market. It's sent stocks on a nice year-end rally for us, and the profits have been sweet.

But don't fall in love with those stocks at these highs. The "help" they're getting from high-yield debt isn't going to last.

In fact, I believe the lull in the junk bond market is going to end in the first quarter of 2016. And I think the ugly sell-off will resume, and that storm is going to take stocks all the way back to their August 2015 lows - and possibly a lot lower.

A lot of people could lose big - well into the double digits - but I'm not worried at all. And when you see the perfect trade I'm about to show you, you'll be ready for the sell-off, too.

Now, this is a bold trade for sure, but it's an easy one, with limited downside risk. And even better, it will let us clean up when the carnage hits next quarter...

A brief rally took junk bond prices higher in early November, but when a short rally in oil reversed, junk bonds fell, too, sinking to new lows in early December.

Then on Dec. 9, 2015, Third Avenue, a distressed bond-focused fund company that opened its doors in 1974 and was considered one of the best high-yield mutual bond fund managers in the business, ran into big trouble... 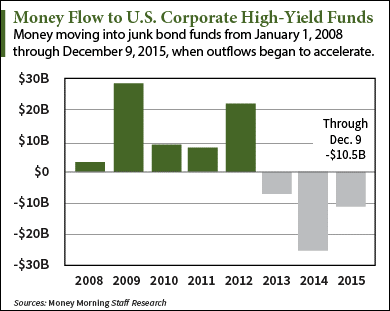 Its Third Avenue Focused Credit Fund (MUTF: TFCVX), a mutual fund loaded with junk bonds, announced it was suspending investor redemptions (which is to say, stiffing investors) and would be selling its portfolio and closing the fund.

The Third Avenue fund had invested in illiquid high-yielding bonds, and as the market for junk bonds hit the skids starting in June, the fund didn't have enough liquid positions it could sell in the open market to meet investor redemption requests.

Essentially, this highly regarded company ended up with a portfolio of bonds it couldn't easily sell.

According to Moody's, high-yield bond issuances total more than $1.8 trillion today, about double the $994 billion outstanding at the end of 2008. And Third Avenue couldn't exit their positions in an orderly fashion in such a huge market.

That's really scary. And it got the world's attention focused on what was happening in the junk bond market.

So investors fled junk bonds in droves. The first week of December saw $3.8 billion exiting high-yield bond funds. According to Bank of America Merrill Lynch, that's the biggest weekly outflow in the last 15 weeks. On top of that, more than $500 million exited leveraged bank-loan funds in the same week.

That accounts for the $31 billion that moved into stocks over the same period, but the year-end rally was not a sign of the health of the markets at all.

But what's around the corner could be even more dangerous - for the unprepared.

In its Dec. 15, 2015, report, the U.S. Treasury Department's Office of Financial Research Director Richard Berner said, "We see elevated and rising credit risks in U.S. non-financial business and in emerging-market economies, the continued reach for yield in a climate of persistently low interest rates, and the uneven resilience of the financial system."

The report points to "high levels of leverage" and while noting that credit remained resilient, except for issuers of junk bonds and the energy and commodities industries, "resilience could be short-lived as creditors reconsider their exposure to those markets."

What's most disconcerting in the report is its assertion that:

"The combination of higher corporate leverage, slower global growth and inflation, a stronger dollar, and the plunge in commodity prices is pressuring corporate earnings and weakening the debt-service capacity of many U.S. and emerging market borrowers. A shock that significantly further impairs U.S. corporate or emerging market credit quality could potentially threaten U.S. financial stability."

In other words, a shock - like, say, a further plunge in high-yield bonds - could set off a financial panic.

With energy-related junk bonds comprising more than 20% of U.S. domestic high-yield issuance, any further drop in oil prices will hit a large part of the total market hard.

As 2016 unfolds, most of the hedges put in place by oil and gas issuers will expire, exposing them to falling oil prices and further weakening their cash flow positions and ability to service their high-interest debts. A precipitous drop in oil prices would likely trigger a rush out of energy-related junk bonds before most hedges expire by mid-summer.

A panic in the energy-related junk sector will force high-yield bond holders - especially mutual funds and exchange-traded fund (ETF) sponsors - to sell their more liquid positions, depressing them, as they attempt to cash up to meet expected redemption requests.

That's why Third Avenue's troubles could be the "trailer" for a horror movie that few investors are prepared for.

Here's what we should be doing to get prepared...

How to Play the Coming Junk Bond Collapse

If high-yield bonds break in 2016, which is likely, the best, easiest way to make money is to short high-yield ETFs like the iShares iBoxx $ High Yield Corp. Bond Fund (NYSE Arca: HYG).

To be safe, an investor could short HYG anywhere around its present level and use a 10% stop-loss to cover their short if oil rises and junk bonds rally in relief.

More aggressive investors who want to bet that junk bonds will continue to get hit in 2016 might want to buy longer-term puts on HYG that expire after mid-summer, when most of the oil hedges energy-related companies have on expire, exposing them to big losses if oil prices stay below $35.

When junk bonds start slipping again, stock investors will panic over the fact that the year-end rally won't have taken markets above any of the resistance levels they've struggled to break through in the second half of 2015.

In addition to shorting the high-yield bond market, I'm preparing my Capital Wave Forecast and Short-Side Fortunes readers for the possibility that credit conditions could deteriorate further in the speculative end of the bond market. That will force stock speculators to start taking their profits and head to the sidelines before the house burns down.

These events will be unfolding much faster than a lot of investors realize.

Shah correctly called for 2015 to be a volatile year, and he’s predicting 2016 to be even rougher. But he’s got lots of ways for us to trade this “perfect storm” profitably. Click here to get his Insights & Indictments and you’ll get all of Shah's best moneymaking ideas for the year ahead. You’ll also get his full investor briefing on how to make even more money from what he calls the new “Greatest Trade Ever” in the impending bond collapse. There’s never a charge for Money Morning Members.

Amazing…you missed your calling as an NFL cornerback. All good cornerbacks like you have zero memory of getting burned on the last play..i.e., HYG Jan 15 2016 75 Put, with 10 days to expiration down 89% from your entry recommendation….now you are out here again recommending similar/same as if your timing had been spot on…wouldn't be so bad if you followed up your recommendations with exit alerts or similar, but those never seem to materialize.