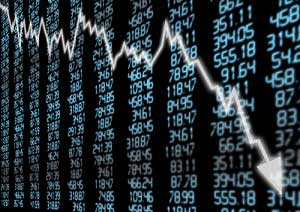 The first trading day of 2016 got off to a rough start today (Monday) as the Dow Jones Industrial Average fell as much as 448 points in morning trading. And that has left many investors worrying about a potential stock market crash in 2016.

Fueling today's losses were many of the same concerns that weighed on stocks in August 2015...

In its biggest decline on record for the first trading day of the year, the Shanghai Composite tanked 6.9% Monday. The smaller Shenzhen Composite plummeted 8.2%.

It was reported earlier Monday that China's Caixin-Markit manufacturing PMI fell to 48.2 in December. The reading was down from the previous month's read of 48.6. It was also short of the 49.0 economists were expecting. China's manufacturing sector has been in contraction for 10 straight months and now sits at its lowest level since September.

Simmering tension between Saudi Arabia and Iran also caused some investors to worry.

Hours after Iranian protestors set fires Sunday in the Saudi Embassy, Saudi Arabia announced it was severing ties with Iran. Oil prices surged 2.9% to $38.35 a barrel amid speculation about a possible supply disruption.

China's stock market crash is not expected to pressure developed markets over the longer term. Still, there are reasons to be concerned...

Will These Concerns Lead to a Stock Market Crash in 2016?

With some fearing that a stock market crash could be coming in 2016, investors may be tempted to run for the exits...

But Money Morning Global Credit Strategist Michael E. Lewitt has shared the best investments to hold in 2016 when the markets are volatile. Here are his top three picks for 2016...