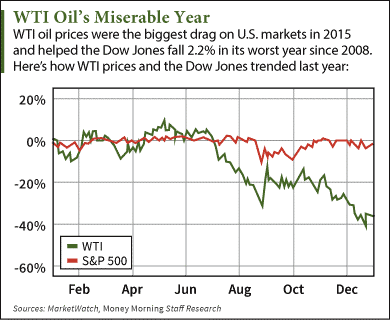 Why the WTI Crude Oil Price Today Is Falling

Today's decline in oil prices comes as tensions escalate between Saudi Arabia and Iran after the former executed 46 people involved in protests during the Arab Spring.

Among those executed was Nimr al-Nimr, a cleric who played a lead role in the uprising and called for better conditions for the country's minority Shiites. Since Iran is the Shiite leader of the Middle East and Saudi Arabia is the Sunni leader, the execution sparked protests among Iranians in Saudi Arabia. The conflict led the two countries to sever all diplomatic ties over the weekend.

The conflict between two of the most dominant OPEC members sparked worry among oil investors as many sold their positions to prepare for any unpredictable events in the region.

However, the conflict could eventually spike global prices by interrupting production in the region. Saudi Arabia produced 10.2 million barrels a day in November, constituting about 11% of worldwide output. Meanwhile, Iran produced 2.9 million barrels a day that month and is set to ramp up exports sometime this year.

According to Money Morning Global Energy Strategist Dr. Kent Moors, today's unrest marks the beginning of a second Arab Spring. The global oil market now hangs in the balance as tensions are expected to spill over the borders of Iran and Saudi Arabia.

The first factor that will influence the WTI crude oil price are the events unfolding in the Strait of Hormuz between Iran and the United Arab Emirates. According to the Encyclopedia of Earth, about 20% of all globally traded oil passes through the Strait of Hormuz every day. That makes it the most important oil transit checkpoint in the world.

Now Iran's military is expected to put additional pressure on the narrow waterway in order to chokehold Saudi Arabia's source of income. After all, oil exports account for roughly 81% of Saudi Arabia's total revenue.

"Saudi oil exports are dependent upon this narrow connection between the Persian Gulf and the Arabian Sea for access to international markets," Moors explained. "While the Iranians do not have sufficient strength to close the Strait permanently, they can create some impediments to normal thoroughfare."

The second factor impacting oil prices will be Saudi Arabia's Shiite presence. Although Shiites make up a small percentage of Saudi Arabia's population, they have a particularly strong presence in the country's Eastern Province. That region also happens to be where state-owned oil firm Saudi Aramco is headquartered and where most of the country's oil production occurs.

Riots broke out there yesterday (Sunday) after news of al-Nimr's execution spread throughout the region. If the unrest continues, it could cripple a large portion of Saudi Arabia's oil operations.

But the third and most serious factor that will affect the WTI crude oil price is neighboring Bahrain.

The small country is situated near the Eastern Province and has dealt with ongoing civil unrest since 2013. Protests and riots will likely continue there in the wake of today's Saudi-Iran crisis for one important reason – Bahrain's government is controlled by a Sunni royal family, while the population is overwhelmingly Shiite.

If Bahrain's unrest spills over into Saudi Arabia, countries all across the Middle East will stage an uprising and set in motion what will officially be known as the Second Arab Spring.

"Bahrain provides the main kindling to engulf the entire region," Moors said. "Such focused unrest, with an unknown next chapter, is merely the latest indication that geopolitical events are having a potential impact on oil supplies, with a rather immediate impact on prices."

Any conflict involving any of these three factors will interrupt the region's production and role in global oil trade. That will inevitably lift both Brent and WTI crude oil prices higher.

The Bottom Line: As the WTI crude oil price today falls toward $36 a barrel, investors are wondering how long the Saudi-Iran situation will keep prices volatile. The unrest will likely continue as more Middle Eastern nations with similar Sunni-Shiite power struggles begin a wave of protests in the Second Arab Spring. All of this will undoubtedly cause major interruptions to the region's normal production operations, which could boost prices around the world.

What Investors Need to Know About Oil Prices in 2016… Oil just capped off one of its worst years since the Great Recession. West Texas Intermediate fell a whopping 39% in 2015. But there are a number of factors that ensure crude oil prices will see a huge rebound this year. And we've mapped out exactly where prices will be by the second and fourth quarters of 2016…