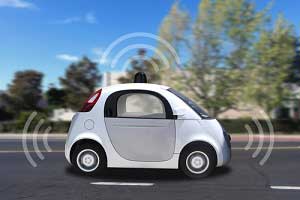 All the buzz surrounding self-driving cars at the 2016 Consumer Electronics Show (CES) is the strongest sign yet of how technology is completely transforming the auto industry.

While auto shows and tech shows were once far different animals, this year's CES has an overwhelming auto presence. Nine major automakers are at the 2016 CES, along with 115 auto tech companies. A decade ago, the auto industry was almost invisible at CES.

It's a sign of the convergence of the tech and auto industries that was almost unthinkable 15 or 20 years ago.

And while driverless cars are getting most of the spotlight, there's a lot of other auto tech at CES as well, from systems that integrate with smartphones to connected car tech that will link autos to the Internet of Things.

We're about to see more changes to the industry in the next 10 years than we've seen since Henry Ford innovated the assembly line and delivered the first affordable automobile.

But perfecting these new technologies - particularly self-driving cars - is proving challenging. Automakers lack much of the technical expertise needed to build these systems. And the tech companies don't know a lot about building cars, which presents its own set of challenges.

So what we're seeing at CES is the emergence of partnerships between Detroit and Silicon Valley.

Such partnerships have the potential to reshape the auto markets over the next decade as self-driving cars and the systems that run them compete for dominance. And that means it's a trend investors need to watch.

Here's what we know so far:

The Quest for Self-Driving Cars Is Creating Odd Couples

One of the biggest auto-tech partnerships is the deal announced Monday in which GM will invest $500 million in Lyft Inc., a peer-to-peer ride-sharing company.

It's the poster child for the evolving relationship between Silicon Valley and Detroit. The GM name has been virtually synonymous with the U.S. auto industry for decades. Lyft, meanwhile, is a four-year-old tech darling expected to go public within the next two years.

The partnership is targeted at developing self-driving cars for use with Lyft's service.

"We think our business and personal mobility will change more in the next five years than the last 50," GM President Dan Ammann told Reuters.

If successful, the venture would have major implications for both companies. Lyft is widely suspected to be unprofitable; self-driving cars would eliminate the need to pay drivers. For GM, Lyft's growing ride-sharing business would ensure a major customer for its self-driving cars.

Another Monday announcement came from graphics processor company Nvidia Corp. (Nasdaq: NVDA) and Volvo AB (OTCMKTS ADR: VOLVY). The Swedish automaker will be the first to use Nvidia's Drive PX 2, which the company is billing at CES as the "world's first in-car AI supercomputer for cars."

Is Ford Looking for a Dance Partner?

In the weeks leading up to the CES show, it was rumored that Ford was planning to partner with Alphabet Inc. (formerly Google Inc.) (Nasdaq: GOOG, GOOGL) on a self-driving car project.

While there's been no official announcement, many believe the companies are in talks. Alphabet has been working on driverless car tech since 2009, but has hinted that it will need some help to get such cars into the hands of consumers.

"We think the right way to do that is in partnership with those folks, you know the car companies of today, who make these vehicles, do [an] amazing job doing it and have been doing it for 100 years," Chris Urmson, director of Google's self-driving car project, told CNBC last June.

When asked this week about whether a deal with Alphabet was brewing, Ford CEO Mark Fields was coy.

"In some cases we will do things on our own and other cases we will partner with others," Fields told The New York Times. "But we are going to keep those conversations private for competitive reasons."

Even if Alphabet and Ford do forge a partnership, it probably won't be exclusive. Alphabet in particular has said it's mostly interested in getting its auto tech out to the public. That means Alphabet is probably talking to other big automakers as well.

As for the other member of Detroit's "Big Three," Fiat Chrysler CEO Sergio Marchionne has said he'd like to cooperate on self-driving car technology with such companies as Alphabet and Apple Inc. (Nasdaq: AAPL). Apple has not declared that it's working on self-driving cars but has made dozens of hires of engineers with expertise in the field.

"We can't replace Google and other tech companies, we should work with them," Fiat Chrysler's Marchionne told Bloomberg last month. "They are bigger and stronger than us and they financially can spend more than us."

It's safe to say that what's happened so far is just a taste of what's to come over the next few years. Cooperation between Detroit and Silicon Valley will be unprecedented.

It's too early to call a clear winner as these partnerships play out, but there is one potential loser: Tesla Motors Inc. (Nasdaq: TSLA). Tesla's main advantage was as a tech-savvy automaker. Growing partnerships between the tech giants and the big automakers erode that advantage.

The Bottom Line: The 2016 edition of CES has put a spotlight on the convergence of the auto and tech industries. Investors should focus on the partnerships between Detroit and Silicon Valley, both those that we know of and those yet to be revealed. Self-driving cars will be a major profit opportunity over the next decade, and the best partnerships have the best shot at dominating this market.

Profit Now from Driverless Cars: While the auto industry sorts out who will build self-driving cars, one group of companies is already benefiting from the trend and will continue to do so no matter which automakers end up dominating the market. Here's how investors can cash in on this trend...

Self driving cars wont just reinvent the automotive industry – but the technology industry too!

Some of the developments which have been made in technology to make self driving cars possible is unbelievable!