The order was issued in hopes it will narrow the so-called "gun show loophole," which exempts most small sellers from keeping formal sales records. Under current law, only federally licensed gun dealers must conduct background checks on buyers, but many who sell firearms at flea markets, on websites, or in other informal settings don't register as dealers.

It wasn't long after the president went public with his executive order that critics took issue with his "grant of constitutional power." On its website yesterday, the NRA claimed Obama's plan was "ripe for abuse" and stated it will not allow for "law-abiding gun owners to become scapegoats for President Obama's failed policies." New House Speaker Paul Ryan (R-WS) called Obama's plan "a form of intimidation that undermines liberty," reported KESQ.com.  GOP presidential hopeful Sen. Ted Cruz (R-TX) told FOX News that "the president is behaving in an unprecedented way."

Certainly the topics over which President Obama has used executive power are unprecedentedly controversial, compared to his presidential peers.

However, the number of times he's exercised executive actions is not unprecedented – in fact, he's middling in that department. Take a look…. 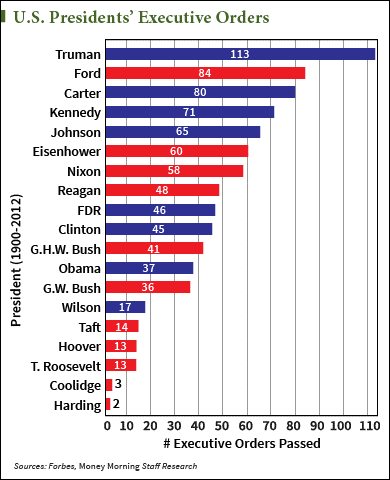 But here's the catch. President Obama has been taking what are, essentially, executive actions, but under a different guise: the "presidential memorandum." These don't count against his total number of executive actions.

It's that alternative, slyer flex of POTUS authority that is truly controversial – and many folks aren't at all aware of how it works…

President Obama Is the Largest Issuer of "Presidential Memorandums" in History

President Obama has governed a lot with his pen during his time in office, earning him the title of "Emperor Obama" as far as former House Speaker John Boehner is concerned.

One thing that makes our commander-in-chief more contentious with his directives is the fact that he's issued a form of executive action known as the "presidential memorandum" more often than any other president in history, just shy of 200 as of Dec. 15, 2014. The next in line was President George W. Bush, who issued 125.

Like executive orders, the presidential memorandum doesn't require action by Congress. It also carries the same legislative authority as executive orders do. And it can sometimes be just as far-reaching and divisive.

What's the Difference Between Executive Orders and Presidential Memoranda? Not Much…
According to a 1999 Congressional Research Service report, presidential memoranda are executive orders in all but name and one small technicality…

Some of the most significant actions of the Obama presidency have come not by executive order but this form of directive. Here are a few of note from the last couple years:

Combined with executive orders such as yesterday's gun control ordinance, Obama is "on track to take more high-level executive actions than any president since Harry Truman battled the 'Do Nothing Congress' almost seven decades ago," according to a Dec. 17, 2014, USA Today review of presidential documents.

I AM A REPUBLICAN THAT BELIEVES OBAMA IS A TRAINER CONMAN, THAT FROM THE BEGINING PLANED TO RUN OUR NATION INTO THE GROUND.THEN DIG THE DEEPST HOLE. THEN CRAM US INTO IT WITH THE HELP OF GEORGE SOROS AND OUR CORRUPT CONGRESS …WE NEED TERM LIMITS.

ALL TRUMP HAS TO DO IS UNDO OBAMAS SELF SERVERING EXECUTIVE ORDERS AND THE DEMOCRACTS. TRUMP THAN WILL UNITE THE WILL OF NATIVE AMERICANS,,WONDERFUL THING ,GIVE HIM HIS RESPECT AS EXECUTIVE,NOT A POLITCIAN..