Pummeled by yet another negative report about iPhone sales, the Apple stock price has shed nearly 4% in the past two days. 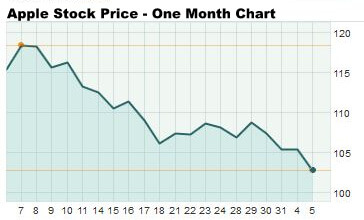 The latest bad news came from Japanese daily Nikkei, which reported late yesterday (Tuesday) that iPhone production in Chinese factories would be cut by 30% in the first quarter of 2016 to compensate for slack demand.

"Inventories of the two models launched last September have piled up at retailers in markets ranging from China and Japan to Europe and the U.S. amid lackluster sales," the Nikkei story said.

The Nikkei report amplified already growing concern that Apple would sell fewer iPhones in the December 2015 quarter than it had in the same quarter in 2014.

Trouble with iPhone sales always sets off alarm bells for Apple investors, as the product accounts for about two-thirds of the company's revenue.

Reports of slowing iPhone sales started in November but have hit with more frequency over the past month. Most have cited data from Apple suppliers indicating a slowdown in iPhone production.

Analysts have taken this data and lowered their iPhone forecasts dramatically. Several such as Morgan Stanley and Credit Suisse are now projecting that 2016 iPhone sales will actually decline year over year - a much worse prospect than slowing growth.

Then the financial media piled on, with pundits declaring that we've reached "peak iPhone."

But is all this gloom really justified? After all, we won't know the truth about iPhone sales in the last quarter until Apple reports earnings Jan. 26.

Here's why Apple's numbers won't be as bad as the analysts think...

Why the iPhone Negativity Is Overblown

For one thing, data from Apple's supply chain is always sketchy.

"The supply chain is very complex and we obviously have multiple sources for things, yields might vary, supply performance can vary. The beginning inventory positions can vary," Apple CEO Cook warned in the Q1 2013 earnings conference call.

And as Piper Jaffray analyst Gene Munster pointed out in a research note yesterday, Cook specifically said in the Oct. 27 earnings conference call that the company expected iPhone sales growth in the December quarter.

"The company has not missed a guide since changing its guidance methods almost three full years ago," Munster said. So while iPhone sales won't blow anyone away, it's very unlikely we'll see a year-over-year sales decline.

In that earnings call, Cook gave several reasons for his optimism: strong iPhone sales growth in China despite economic headwinds there, a rising rate of "switchers" from the Android platform, and the fact that about two-thirds of current iPhone owners had not yet upgraded to the iPhone 6 series.

Another new factor is the iPhone Upgrade Program Apple launched in October. It allows customers to upgrade their iPhone every year, which will boost sales by shortening the upgrade cycle.

And don't forget the iPhone 7, a major upgrade, is due in the fall.

Why the Apple Stock Price Will Bounce Back

But aside from all that, it's easy to forget that Apple's iPhone business is phenomenally successful. The product earns more revenue by itself than most other tech companies, including Amazon.com Inc. (Nasdaq: AMZN), Microsoft Corp. (Nasdaq: MSFT), and Alphabet Inc. (formerly Google Inc.) (Nasdaq: GOOGL).

According to Cannacord Genuity, the iPhone took 94% of the global smartphone profits in Q3 despite having a market share of just 14.5%.

What's more, Apple's other initiatives, such as the Apple Watch, its strategy for selling more to businesses, Apple Pay, Apple TV, and more, will bolster earnings down the road.

Selling Apple stock now is premature to say the least. In fact, the recent sell-off is a buying opportunity. Even many of the lowered Apple stock price targets fall in the $140 to $150 range. And over the longer term of two to three years, the AAPL stock price should reach $200.

The Bottom Line: Gloomy iPhone sales forecasts have weighed down Apple stock for weeks. But the analysts predicting a year-over-year sales decline have overreached. It's more likely the iPhone will have sales growth in the low single digits for the December quarter. Meanwhile, AAPL stock is cheap. Any investor thinking of adding Apple shares should take advantage of this buying opportunity.

Your articles are well written!

I really enjoy your commentary on the markets and look forward to being a member of the Monday Morning newsletter group.