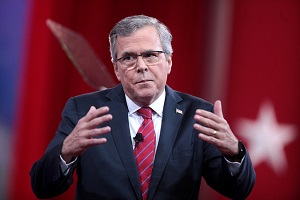 An interesting takeaway from this new data is that when the poll initially began last year, Bush's overall familiarity among Republicans was already high. "Familiarity" is defined by Gallup as the percentage of those surveyed who know a candidate well enough to rate him or her either positively or negatively. Last July Bush saw 81% familiarity, which has since gone up to 89%.

That means Bush's name recognition is certainly not the problem here.

Bush's current -1 net favorability rating among Republicans and Republican-leaning independents is the worst of any major GOP candidate – even lower than GOP presidential hopeful and Ohio Gov. John Kasich's (+5), and well below the seven other Republican candidates Gallup is tracking.

John Kasich is clearly the most successful experienced Govenor in the field. He is the only one who can walk into the President office and understand what is necessary and work across the political aisle to get the actions needed done. He is a proven leader in government. No question mark needed!