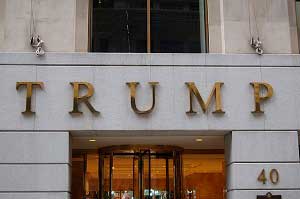 South Carolina is in a unique position. Voters will cast their ballots next after elections in Iowa and New Hampshire.

The real estate mogul is not expected to carry Iowa. On Wednesday, The New York Times reported Texas Sen. Ted Cruz is expected to do that.

Trump is, however, expected to win New Hampshire. He's insanely popular there – with 29% of registered GOP voters supporting him, reported a Public Policy Polling survey released yesterday. He also holds twice the polling support of the next rival candidate – Florida Sen. Marco Rubio, who has 15% support.

It will be up to South Carolina to decide the split between Cruz and Trump.

The GOP, fully aware that the primaries may come down to the state, are acting now to build a Trump firewall there…

On Wednesday, former chairman of the South Carolina Republican Party Katon Dawson issued a plea for former President George W. Bush to get involved in the state's Feb. 20 primary, reported Bloomberg that day. He thinks Bush, who is still quite popular among South Carolina Republicans, is the key to stopping Trump. Dawson called the G.W. Bush's involvement a probable "game changer," especially for former Florida Gov. Jeb Bush.

Nationally syndicated columnist Matt Towery told Newsmax that whoever wins South Carolina "is going to be viewed as the presumptive leader in all these other SEC primaries. Those who want to stop Trump have to make South Carolina their ultimate point of demarcation."

As of today, the RealClearPolitics poll average for South Carolina currently shows Trump in the lead with 33.7%. Cruz follows at 19.3%, then Rubio at 12.7% and Ben Carson at 11.3%.

Read between the lines. This so called "firewall" may be about a lot more than just a an effort to stop a candidate, whose political philosophy differs from conventional conservatism. The US oligarchy on both sides of the Congressional aisle and all their respective donors and lobbyists have for decades engaged in worst practices from many vantage points, including legal, ethical, moral, economic, political, etc. An outsider, such as Trump, who has no ties to the insiders, and no obligations to cooperate, presents a clear and present danger. Insiders from the Alpha to the Omega, given a Trump Presidency, will almost surely start toppling like a line of falling dominoes. The results will be indictments, convictions and penalties, both civil and criminal, for everything from soup to nuts, including 9-11, Fast and Furious, Benghazi, Hillary emails, fake weapons of mass destruction, MF Global, Saudi ownership via the North American Islamic trust of most of the mosques in the US and promotion of the extremist Wahhabist branch of Islam in those mosques and on and on. We US Citizens should stop allowing the media to direct and control our thinking. True information about local, state, national and world events is readily available on the Internet. We just need to look for it. Neither the GOP nor the DNC are our friends.

Why try to stop Donald Trump? I don't see anyone else in the Republican Primary field who has demonstrated that they also have the proven abilities and energy and financial independence needed to give our country the boost it badly needs at this critical time.

Let's be brutally honest in deciding only on the basis of what is best for the country, and ignore self interest and narrow single issue agendas. Our country needs this now, more than ever!