Editor's Note: We're sharing this Total Wealth with you today because Keith believes the triple-digit market drops we've seen over the past four days actually represent a fantastic buying opportunity – if you have the right tactics and the confidence to use them correctly. Keith's going to show you how to do just that…

Over the past 12 months we've had several major market corrections and, each time, I've counseled you to buy into the madness because history shows beyond any shadow of a doubt that's the path to enormous profits.

And, each time, I get a blizzard of emails, and the past few trading sessions have been no exception…

…but what happens if the markets go down further?

So I thought we'd answer that today with a quick look at how to combine two tactics for maximum profits and minimum risk, especially on big down days.

It's powerful stuff, and not just because of the profit potential.

The real message here is that the tools I'm going to share with you today can give you the confidence boost you need to buy on big down days when everybody else and their mother has their finger on the "sell" button.

As usual, I've got a few easy-to-understand examples so you can put what you learn to work straight away.

Here's how to protect yourself from a market dislocation – and profit when everybody is losing.

15 Reasons to Keep This Week's Market Rout in Perspective

Monday came unglued in a hurry and that, in turn, sent a lot of investors packing, and it hasn't really let up.

To be clear, panic wasn't quite the order of the day, but you could certainly feel it creeping in around the edges following weak data from China and the severing of diplomatic relations between Iran and Saudi Arabia.

By the time I hit the airwaves on "Varney & Co," futures were set for a triple-digit drop on the open.

As usual, I couldn't wait to buy.

And, as usual, the numbers gave me the perspective I was looking for.

Since 1928 there have been only 15 declines of more than 1% on the opening day of a new year. Eleven out of the prior 14 occasions, the S&P 500 was up an average of 3.34% over the balance of the month with a median gain of 5.03%, according to Bespoke Investment Group LLC.

Yearly data isn't much different. Since 1928 the S&P 500 has risen an average of 2.90% following a worse than 1% close on the first day of a new year 57% of the time. It's worth noting that the median gain over the same time frame was 7.22%, also according to Bespoke. 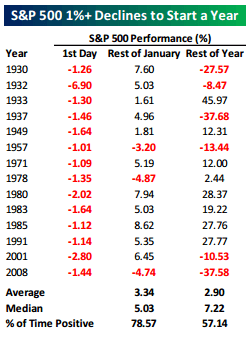 Will the markets turn around this time?

I have no idea, but I don't care much, either – I know that there are specific tactics that can help me profit from markets that are moving higher or lower. Like a chef, I'll simply adjust the ingredients in my recipe for higher profits.

Lowball orders are something we've talked about several times and are, bar none, one of my favorite tactics for exploiting temporary price drops.

These Tactics Let You Turn Market Dips to Your Advantage

Lowball orders take away the advantage normally held by the world's biggest, most ruthless traders because they help you specify a price you want to pay for any stock well in advance of an actual market rout. Or, a string of days like we've been having.

What you're hoping to capture by using them is exactly the sort of triple-digit swoon that sends everybody else packing.

It doesn't really matter why the market craters. A drop, for example, can be because the markets overreact to news in China, Putin's latest move, or as was the case this time around, events in the Middle East heating up.

Your goal is to buy at levels others believe are impossibly low at a time when other traders are not thinking clearly about the potential that they're giving up by selling.

Here's where the questions usually start or the hands go up in my audiences.

Many investors worry that big down days don't happen in isolation. And they're right – as we're seeing right now, big down days often run in twos or threes.

That's why, not surprisingly, they resist buying in because the markets "could" keep going lower even if they've used a lowball order to buy in at a huge discount in the first place.

Here's what they're missing.

There's nothing written anywhere in any investment book I'm aware of that says you have to buy all at once.

In fact, there's a huge argument to be made for buying in stages using another of my favorite tactics – dollar-cost averaging.

If you've never heard the term before, dollar-cost averaging helps you buy a specific amount of any investment on a regular basis.

What I like about dollar-cost averaging is that it helps keep risks low yet returns high, because it prevents you from investing a single large amount at the wrong time… like now, for example, if you're one of millions of investors worried prices could drop further.

I'm also a big fan of the discipline dollar-cost averaging instills because it takes emotion out of the equation.

And finally, dollar-cost averaging forces you to buy more shares when prices are low, while fewer shares are purchased when prices are high. Over time, your basis – a fancy way of saying your total cost – actually drops and that, in turn, means you have that much more upside.

Had you dollar-cost averaged in for three months starting that same September, though, your holdings would be sitting on 581 shares worth $7,333 on the same day.

Both are losses and that's no fun. But here's where it gets interesting.

More to the point, 12 months later you'd be sitting on profits of 37.98% because of dollar-cost averaging versus barely breaking even had you invested all at once.

…even if stocks still have a ways to go before they find another bottom.

Hi Keith
Can you include some of the TSX stocks in your analysis under high velocity profits?
Thanks

Always looking for interesting perspectives on the market