Markets have opened the new year with a resounding thud! Pundits are attributing this to trouble coming out of China, whose currency is again being devalued by the authorities. That's not quite true.

Readers will remember that U.S. stocks fell sharply last August when China unexpectedly began devaluing the yuan. 2016 has started off with another round of devaluations that sent Chinese stocks sharply lower – in fact, the Shanghai Index opened the year down 7%.

This sent U.S. stocks down sharply on the first trading day of the year. After a brief reprieve on the second trading day, both markets headed lower again on Wednesday and Thursday as China lead the way down.

The truth is, China is just a symptom of a larger problem, one I've been talking about nonstop, and we're starting to feel the full-blown disease. 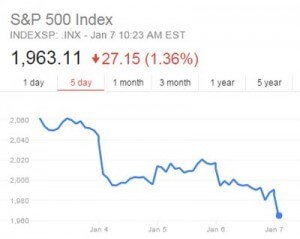 The mainstream financial media is in denial about China's economy. Talk about how China is going to grow at 6% or 7% is ridiculous. The country's economy is probably shrinking.

Sooner or later markets get religion and sins get punished. That time is now. That means investors should get religion before they end up meeting the devil in person.

Before the financial crisis, the world experienced a housing bubble that formed in the United States, spread to the rest of the world, and caused a global financial panic in 2008-09.

After the financial crisis, the world experienced a commodities bubble based in China that spread to the rest of the world and began to come apart in mid-2014.

This has been smoothed over in the media, but it was a key turning point and the start of a stealth bear market.

After seeing its debt quadruple from $7 trillion before the financial crisis to more than $30 trillion today, China is left with overcapacity in its commodity industries, a landscape littered with massive ghost cities, an underdeveloped consumer economy, and no way to repay all of the debt that it incurred to battle the 2008-09 financial crisis. It continues to produce and ship mountains of iron ore, aluminum, copper, zinc, and anything else that isn't nailed down to the rest of the world, pushing down global commodity prices to levels that are bankrupting the global commodity complex. China has announced some cuts in commodity production, but any slowdown in production will further reduce its already shrinking growth.

The consequences of this are manifold:

Companies like Glencore Plc. (LON: GLEN), Anglo American Plc. (LON: AAL), and other commodity traders and miners are eviscerating themselves in order to survive. Their stock prices have been decimated.

But the damage is just beginning because the global financial system and the U.S. financial system are more leveraged than ever before. This is a very important point, so I want to take a quick moment to discuss it.

Today, U.S. nonfinancial corporations (meaning corporations other than banks) have 40% more net debt (i.e. debt net of cash) than they did in 2007.

We hear a lot of talk about how U.S. corporations have high cash balances. That's true, but that statistic is very misleading. First, a lot of this cash is sitting offshore and would have to be taxed if brought back to the United States. Further, the brilliant analyst Stephanie Pomboy of MacroMavens points out that the top 25 S&P 500 companies hold half of the $1.6 trillion of this cash while the bottom 250 companies have just $89 billion among them. This cash shortage among the "have-nots" will be a big problem when they have to refinance their debt at higher rates due to the fact that their bond prices have crashed and their cost of capital is much higher than it was than during the post-crisis bond bubble. And the situation is much worse among smaller high-yield borrowers who aren't large enough to be included in the S&P 500. So most U.S. companies are not cash rich at all.

The low interest rates created by the Fed's seven years of zero-interest-rate policy and quantitative easing (QE) disguised a lot of sins. They allowed China to play host to the biggest debt bubble in history. That bubble is now popping. And they allowed U.S. corporations to borrow more money than at any time before in history.

Sooner or later markets get religion and sins get punished. That time is now. Take cover in 2016.