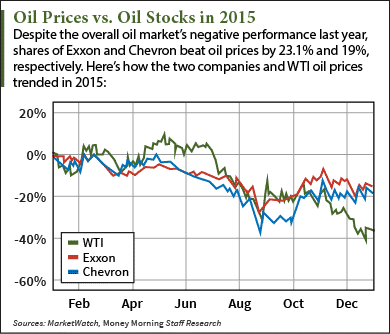 With oil prices near their lowest level since 2003, many investors don't know how to find the best oil stocks to buy in 2016.

After all, last year's crash in oil prices dragged many high-volume oil stocks down to multiyear lows.

But instead of fleeing the energy market, this pressure has actually presented us with an excellent opportunity to buy oil stocks at a huge discount. You see, there are a number of trends in motion right now that will ensure investors bank huge profits from the oil sector's turnaround...

The best oil stocks will profit from the inevitable rebound in oil prices.

You see, the average oil well produces most of its volume within the first 18 months it is online. The majority of U.S. oil wells are now starting to see a drop off in production. That makes sense considering the oil price crash has been going on for over 18 months now.

"The U.S. rig count has declined precipitously... that can't help but lead to a drop in supply, especially when it comes to shale or tight oil," Moors said. "It's called the decline curve and can't be finessed forever."

While supply levels continue to fall, demand will rise at a confident pace. According to the International Energy Agency (IEA), global demand will hit 95.6 million barrels a day in 2016. That's up 1.5% from the projected average of 94.2 million barrels by the end of 2015.

"The fundamentals paint a picture of tightening oil supply at a time of increasing demand," Moors said back in September.

But the most important reason why oil stocks will recover in 2016 is the wave of M&A washing over the energy sector.

Bloomberg analysts forecast that oil and gas companies cut their capital spending by 21% last year and will continue to do so until prices stabilize. For smaller producers struggling to conserve cash, being acquired may be their only option.

"The specific objective of M&A may vary from deal to deal, but the overall goal remains the same: to streamline participation in advance of sector stabilization and the inevitable rise in raw material prices," Moors said on Sept. 16.

Oil M&A activity started off strong last year and will continue this year. According to PricewaterhouseCoopers, there were 98 oil deals accounting for $130 billion during the second and third quarters of 2015. About $80.8 billion of the cash generated came from just seven deals alone.

In fact, we saw the biggest oil merger in more than a decade last spring...

On April 8, Royal Dutch Shell Plc. (NYSE ADR: RDS.A) bought BG Group Plc. (OTCMKTS ADR: BRGYY) for $81 billion. The merger became the third-largest deal in the world last year and will create the single largest independent producer of oil and natural gas. Once the deal finalizes this year, the new company's market value will double that of BP Plc. (NYSE ADR: BP) and be larger than that of Chevron.

But M&A won't turn every company into the best oil stock to buy in 2016 overnight. That's because oil prices will need to bottom out before moving higher. In other words, prices will get worse before they get better. Although they will climb in 2016, they still won't reach the triple-digit levels they saw in 2014.

So for now, the best way to bank profits from the sector's demise-and-rise trajectory in 2016 is to target oil companies practicing this type of drilling activity...

These Are the Best Oil Stocks to Buy in 2016

The best oil stocks to buy in 2016 will be companies engaging in "VSF drilling."

"VSF" refers to vertical, shallow, formula drilling. This is when a company drills wells that are only a few thousand feet deep in order to quickly produce a large amount of volume. VSF wells are most likely to turn a profit during low price environments since they only cost $600,000 or less from start to finish.

Since deep fracking projects can cost upwards of $5 million, they can drown companies in debt when oil prices are low. That's because high production volumes don't offset high operating costs when prices are near their current $35 levels.

"The extension of vertical, shallow pattern drilling emphasizing known basins and low-cost operations will actually be encouraged in this kind of climate," Moors said in February, when WTI sank below $60 for the first time since the Great Recession. "This is always the way money is made when oil and gas come under pressure."

One company pursuing VSF drilling projects this year is Crescent Point Energy Corp. (NYSE: CPG). On Jan. 7, the Canadian oil firm announced it will drill vertical, shallow wells in Canada's Saskatchewan province as part of its capital expenditure plans for 2016.

"The high-quality, shallow nature of the company's Saskatchewan plays provides the opportunity to outperform with lower cost and higher recovery factors relative to other plays in North America," CNN reported after Crescent Point released its spending details.

The Bottom Line: With oil prices sinking below $33 this month, investors are wondering if beaten-down oil stocks will recover in 2016. The current pressure on the oil market presents the perfect opportunity to invest in oil companies for cheap - but don't just add any oil stock to your portfolio. The best oil stocks to buy in 2016 will be the companies focusing on vertical, shallow, and cost-efficient drilling operations.

Don't you have the decimal point in the wrong location? Believe correct production numbers are 29.16 and 28.97 million barrels per day.

Actually those are monthly numbers. We've fixed it in the story. Thanks for the heads-up!