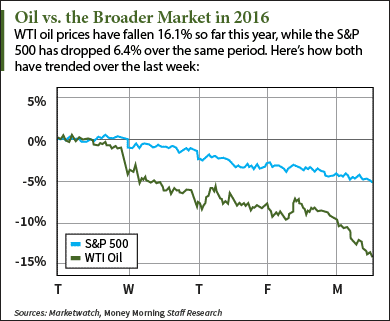 The Brent crude oil price tumbled even lower today. The global benchmark plunged 6% to $31.88 a barrel. It's currently down 15.4% so far this year.

Why the WTI Crude Oil Price Is in Free Fall Today

Oil prices are on track for their sixth straight day of declines thanks to another day of huge losses in China.

"The global glut issue has been around for a while. Right now it is the fear of a Chinese slowdown that is spooking the market," said Barnabas Gan, a commodity analyst at the Singapore-based investment bank OCBC, to MarketWatch. "Most of the selling is based on emotions and panic."

As the second-largest oil consumer in the world after the United States, China's struggling stock market has rattled investors concerned about the country's slowing oil demand. After all, the volatility has caused the Dow Jones Industrial Average and the WTI crude oil price to fall 6.6% and 15.5% in the last week, respectively.

But there's another international event currently shaking up oil prices. And Money Morning Global Energy Strategist Dr. Kent Moors asserts this currently unfolding conflict is dominated by one "flashpoint" that could interrupt the global oil trade and cause a massive spike in prices…