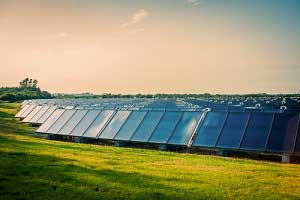 The United States is already one of the world's biggest clean-energy investors, but the extension is a major boost to the industry and solar stocks.

Some $73 billion in new investment in renewable energy is expected by 2020. That will provide 8 million more American households access to clean, renewable, affordable energy.

"Solar is here to stay," Moors said last month. "There's now a confluence of technology and economy that assures these new energy sources will continue to be adopted and improved upon – at ever-increasing rates."

You see, countries around the world are ramping up production. China is projected to spend $83 billion on solar energy projects in 2016 thanks to the government's new panel installation quota. The Indian government is investing $100 billion to install 100 gigawatts of solar capacity through 2022 – up from the nation's current capacity of 4 gigawatts.

As solar spending increases around the world, we've picked five of the top solar stocks to watch in 2016…

First Solar Inc. (Nasdaq: FSLR) develops, engineers, constructs, and operates some of the world's largest grid-connected PV plants in the world. The Arizona-based company has over 10 gigawatts installed globally. On Jan. 5, Goldman Sachs upgraded FSLR to "Buy" from "Neutral" with a $100 price target. Janney Montgomery analyst Michael Gaugler recently boosted his 2017 earnings-per-share estimate 7% and hiked his price target to $82 from $79. Shares of this solar stock to watch trade at $64.87.

SolarCity Corp. (Nasdaq: SCTY) installs the panels made by companies like SunPower and First Solar, tying together financing and installation to bring solar power to residential and commercial buildings. Bernstein analysts estimate the U.S. tax-credit extension is worth $50 to $55 per share to SolarCity. Taking into account the tax extension and favorable new rules in California, Bernstein's Hugh Wynne lifted his price target to $69 from $36. SCTY shares trade at $47.16 right now.

SunEdison Inc. (Nasdaq: SUNE) develops and operates hundreds of solar plants, representing a global PV capacity of 135.8 MW. Based in California, the company specifically provides opportunities for Ontario firms to leverage rooftop space and vacant land for installation of solar systems through purchase or lease. SunEdison recently reported the interconnection of two new solar plants in Ontario. SUNE shares trade at $2.95, making it one of the lowest-priced solar stocks to watch in 2016.