The chaos of the first trading week of 2016 was unprecedented in modern history. There hasn't been an opening week like that since 1928.

Panic is starting to creep in as all U.S. indexes hurtle towards a "classic" 10% correction.

Millions of investors are looking for the exits and a reliable safe haven. And with Middle East tensions flaring and perpetual uncertainty over Chinese markets, millions more are sure to follow.

But… all that bad news on the markets is terrific news for gold – and everyone holding it.

As those reactions intensify, I think we'll see gold hit these levels in 2016…

Over these last five trading days, including the first three of 2016, the S&P 500 lost about a substantial 4%, while oil reversed about 8%. Gold and gold equities were among the few sectors to buck the overall trend and move higher.

Then suddenly, near 8:30 a.m., it shot higher to $1,078. It seems to have been for a combination of reasons, but the main reasons look like dollar weakness combined with stocks and geopolitics.

Saudi Arabia cut diplomatic ties with Iran after attacks on its embassy in Tehran, weak manufacturing data caused the Chinese SSE stock index to drop a massive 6.86%, triggering trading halts, and that shocked U.S. stock futures lower by 1.7% for the S&P 500.

This continued on Tuesday, Jan. 5. The S&P 500 regained only four points after Monday's 31-point loss, while gold maintained its gains from Monday and held around the $1,078 level.

On Wednesday, Jan. 6, on top of renewed market weakness, North Korea announced it had successfully tested a hydrogen bomb. Gold started a steady climb just after midnight and essentially kept going to hit a seven-week high of $1,094.

Adding fuel to the fire, Chinese stocks suffered another major sell-off on Thursday, forcing the same 7% trading halt. That suspended trading for the rest of the day just half an hour after the open.

The U.S. Dollar Index (DXY) gathered steam on Monday, then maintained strength on Tuesday and Wednesday, remaining near 99.5 most of that time. By early Thursday, however, the dollar retreated to 98.80. 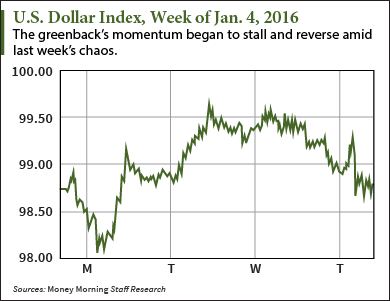 Despite the typical headwind that is a rising dollar index, gold managed to head higher.

And here's how gold's behavior looks in a recent chart: 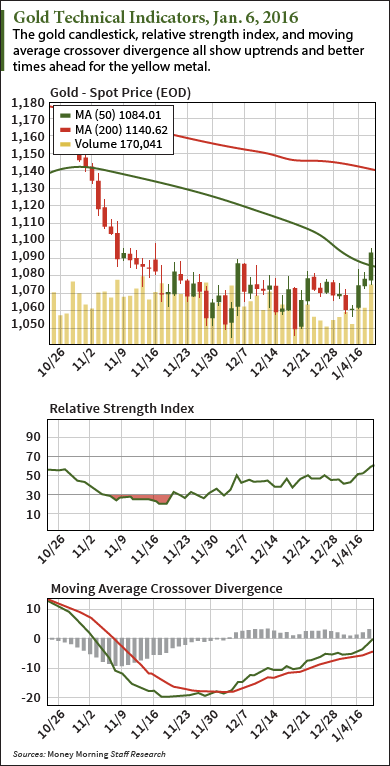 This graph sums it all up. We can see three consecutive higher closes on strong buying volume. As well, the relative strength index (RSI) and moving average crossover divergence (MACD) indicators are both trending higher. And that doesn't even include the Jan. 7 push to $1,107.

It's a little early to get too excited, but an encouraging aspect of this price action is that it pulled gold up to close above its 50-day moving average.

In my view, gold is heading higher from here, but it has a hurdle to clear.

The Fundamental Drivers for Prices This Year

As I pointed out earlier, I think the biggest theme for this year will be volatility… in just about all markets, including stocks, bonds, energy, and commodities. Precious metals are likely to experience some volatility, too, but as we've seen recently, they've weathered the turbulence.

Besides – volatility doesn't mean they can't do well and move higher.

After four-and-a-half years of correcting, gold is now much closer to a bottom. I'm not sure that the final bottom is in. It could yet make a run at the sub-$1,000 level. If that happens, I'd expect it to be short-lived, and for considerable buying to quickly come in and pull the price higher.

Besides this kind of shorter-term technical price action, I see a strong chance that gold has either already bottomed, or will put in a bottom this year, and will finish the year higher than the $1,062 where it closed 2015.

Gold Price Driver No. 1: Mine Supply

The Thomson Reuters' GFMS group says global gold output has risen every year since 2008, but that's likely to change this year.

Tankard commented, "This is in large part likely to be driven by the relative lack of development going into the industry over a three-plus-year period." He went on to explain that producers have been "high-grading" their production for several years thanks to weaker prices. But that option has now largely run its course, meaning lower-grade ores will produce less gold.

Gold Price Driver No. 2: The Cost of Money

The Fed finally decided to raise rates in mid-December. But that was by a minuscule 0.25% to 0.5%. And although they project further increases this year, that will be "data dependent," and I think persistent weakness will make it too difficult for Yellen & Co. to follow through.

As well, while inflation could start to finally take hold this year, deflationary forces are still going to work against that to keep any increase relatively weak.

That means that real interest rates will stay low, so the opportunity cost of owning gold will continue to support its ownership and attractiveness versus other asset classes like stocks, whose bull is getting long in the tooth.

Last year India replaced China as the biggest overall buyer of gold, with a total import level likely to reach a whopping 1,000 metric tons, up from 900 metric tons the previous year.

Also as investors start looking to diversify from challenging stock markets, I expect record sales set at various mints around the world to continue into 2016.

Low gold prices helped push U.S. Mint sales to a record level in 2015, with gold coin sales rising by an astounding 53% over 2014.

Overall, I think we'll see gold approach the $1,200 level in 2016 as the bull market finally resumes.

It has certainly been a great start.

Bullish gold catalysts and mounting global chaos make today the best time to buy gold in five years. Michael Lewitt has just published a report with the best ways to buy gold and how to use it to protect and grow your money. His recommendations work for any market, but they're specially targeted for the coming plunge. Click here for instant access to the report, and you'll get his Sure Money investor service delivered twice each week. There's no charge for Money Morning Members.

What matters to the price of gold is how much JPM, HSBC, and the rest of the manipulators are willing to go naked short in the face of rallies and how serious they are about continuing their midnight bear raids where they dump tons into thin markets. The rest is just chatter. Until they back off or are overrun, don't expect gold to go materially higher. And don't hold your breath on their backing off or being squeezed. The market is rigged. Supply and demand factors don't mean very much now. If they did, the fact that Chinese buying ALONE… Read more »

You are absolutely right! This whole thing has been a big crooked scheme ever since people realized uncle Fed had their backs in the stock market. At the same time they have constantly added dead weight to the gold and silver markets forcing it down with their fake, phony contracts! I've said it for many years: "Be honest, hold truth and don't live in fantasy land because there will be a heavy price paid for doing so. In this life you will pay now or you will pay later, but there will be a price to pay for corruption" It… Read more »

I don't think so. When the world was falling apart in 2008 you would have thought that gold would have been a safe investment haven and rallied. Instead it tanked to @$750/oz. Go figure??
If you are going to take this play maybe invest in Silver Futures. While the two metals generally move in tandem and it's quite possible that silver will continue to trend lower gains to the upside usually generate a greater percentage return.

The drop in gold was exactly what you'd expect, followed by a rapid rise after the Fed and the Feds panicked and went full retard on the bailouts and money conjuring. The 2008 event was a liquidity crisis. What's the most liquid asset in the world? Gold. When people can't selll what they want to, they sell what they can. And price had risen for years 7 years prior, giving weaker hands an incentive to book some profits and harvest that cash. Silver futures? Are you pulling our leg? That's the most manipulated market on earth. JPM and Scotia Mocatta… Read more »