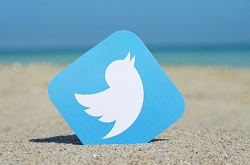 And we see the Twitter Inc. (NYSE: TWTR) stock price continuing to be extremely volatile in 2016…

The TWTR stock price was climbing this morning after Twitter published a blog post detailing new features for its broadcasting app, Periscope.

Twitter acquired the live-broadcasting app in March 2015 for an undisclosed amount.

Periscope allows users to share a live feed of themselves that other Periscope users can watch in real time. Now Twitter will integrate live broadcasts as well as replays directly into tweets.

You see, Periscope doesn't generate revenue, and Twitter doesn't appear to have a clear plan for monetization.

Plus, there are two major obstacles for Twitter when it comes to monetizing Periscope:

You see, there is a fundamental flaw with Twitter that Periscope highlights. This flaw has led to three different CEOs since its inception, a volatile Twitter stock price, and sluggish MAU user growth…

The fundamental flaw behind Twitter is that the social media site has never established a clear purpose.

Co-founder and former CEO Evan Williams and Jack Dorsey have always been at odds about what Twitter is and how it should be used.

In his book "Hatching Twitter," New York Times reporter Nick Bolton highlighted how Dorsey always felt like Twitter was a tool for sharing what was happening to you specifically. Williams believed it was a platform to share events around the world.

The difference is subtle but critical for TWTR shareholders.

Williams has always believed that Twitter's ability to deliver news is its strength and that it should be viewed as a news service provider. Dorsey thinks that the purpose of Twitter is to share what you are doing with friends, family, and other Twitter users.

That caused Twitter to become a combination of both CEO's visions. Periscope now blurs that even further.

Periscope could be used to share videos of an earthquake, but it could also be used to broadcast someone shoe shopping.

Advertisers have a clear understanding of what Facebook Inc. (Nasdaq: FB) is and the extensive reach Facebook has with its 1.55 billion MAUs. That has helped the Facebook stock price climb 160% since its IPO.

Twitter only added four million MAUs in Q3 2105 from Q2 2015. That brought its total count to 320 million. Investors look for large increases in MAUs because advertisers pay for extensive reach. The larger Twitter is able to grow its audience, the more advertising revenue it can earn.

The Bottom Line: The Twitter stock price will remain volatile and underperform until the company establishes a clear purpose. CEO Jack Dorsey has yet to find a way to make Twitter more attractive and seem easier to new users. New offerings like Periscope are currently financial drains that have yet to prove they will actually add MAUs to Twitter.