A handful of analysts, citing the pounding big banks' stocks have taken, driving them deeply into "Oversold" territory (with a few trading near their 52-week lows), expect positive earnings news to push share prices sharply higher.

I say, good luck with that.

That's because there probably won't be any positive bank earnings surprises – and any unexpected good news will likely get discounted quickly as investors look past short-term revenue bumps or cost-cutting measures and see a tough year ahead.

The KBW Nasdaq Bank Index shows bank shares down 17% from their July 2015 highs, down 15% since December, and down almost 10% so far in 2016. That much negative momentum is going to be hard to overcome.

And if the big banks don't turn in good report cards – it could spell trouble for markets that have plenty of bad news to deal with already. 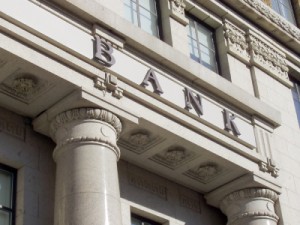 Here's what to expect…

Even though big bank stocks have been widely shorted (another reason analysts are calling for a pop in bank stocks), it will take extraordinary, sustainable earnings gains and positive forward guidance from management to keep share prices from falling, or reacting positively on announcements then falling from lack of follow-through buying.

One of the bright spots big investment banks are expected to point to are advisory fees.

Mergers and acquisitions (M&A) in the fourth quarter reached near-record levels, capping a record year. Globally, M&A activity topped $4.9 trillion in 2015, outpacing the previous record of $4.6 trillion set back in 2007.

But amidst all that activity, Dealogic recently estimated investment banking (IB) revenue in the fourth quarter will be $9.5 billion, 12% lower year over year and the lowest level of fees collected in the last three months of any year since 2011.

Deutsche Bank expects advisory and underwriting IB fees will be down 15%.

Meanwhile, the consensus of surveyed Street analysts are calling for M&A quarterly revenue to be up 20%, but for debt, equity, and capital markets revenue to be down 10% to 25%.

There's no question debt and credit trading was difficult in Q4. High-yield debt in general hit the skids hard, and nowhere was that more prevalent than in the energy sector.

Even the U.S. Federal Reserve is worried about the impact of energy losses and bankruptcies from energy companies.

Their most recent Shared National Credits exam, a review the Fed's been putting out since 1977 on large syndicated "classified" loans (loans divided up between banks with unpaid interest and principal and in danger of default), noted that 74% of the increase in classified loans were oil and gas loans, "where near-default loans increased four times."

No matter what revenue banks might squeeze out of credit and debt trading in Q4, the expected turn in the credit cycle, now being forecast widely, will dampen future revenue prospects in this traditionally robust revenue-generating arena for banks.

The feared turn in the credit cycle is already causing banks to increase their loan loss provision expenses.

Deutsche Bank analyst Matt O'Conner expects big banks to increase their loan loss provisions about 10 basis points starting in the fourth quarter. Every 10 basis points of expense increases will knock 4% off banks' earnings, according to O'Conner.

Besides debt and credit trading, equity trading's been a rough ride for most banks. Not only has the IPO market dried up and underwriting slowed considerably, wide swings, especially to the downside, impact banks' "principal" trading.

Banks take down blocks of stock clients want to sell and end up selling them at much lower prices when markets plunge. Generally, large block principal trades are moneymakers for the banks, but with so many steep down days, it's unlikely trading desks have been able to make money off a lot of those big blocks.

To the contrary, they may have taken some big hits. We'll see.

Then there are those notorious "one-off" provisions and charges. It's going to be interesting this earnings period to see what "one time" write-offs banks take. For example, some might take one-time losses on energy loans that they say are one-off, but which investors might consider to be the tip of an iceberg, depending on how banks classify certain loans.

This is the bottom line: Fourth-quarter earnings might have a couple of positive surprises that might create short-term pops in some banks stocks. But with more potential negatives lurking in their reports, it's possible they show their worst hand, hoping to get the bad news out and create better sequential comps for the first quarter's earnings.

Again, I say, good luck with that.

At my Short-Side Fortunes service, we've already placed our bets that the banks will continue their downward trajectory in 2016. And we may add to the list of banks we're betting against if the markets don't settle down soon and banks don't turn in some spectacular earnings surprises along with better forward guidance.

Why 2016 Will Be So Volatile: Markets the world over will get rocked by volatility in 2016, and unprepared investors are going to get hurt. Here's who you can thank for these turbulent markets – and how you can dodge the blows…

I don't get it. You say that nobody is going to have good numbers but JPM reported net income of $5.4 billion and earnings of $1.32 a share. Analysts expected $1.26. That's a good number and shares are up 3%.