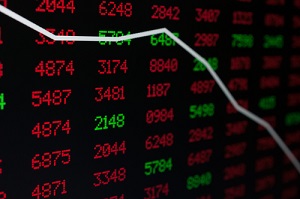 Even with today's (Thursday) gains from the broader markets, we are still in stock market correction territory.

Since reaching highs in May, the Dow Jones Industrial Average is down 10.6%. The S&P 500 is down 10.3% since August, and the Nasdaq is down 10%. Those declines put all three indexes in stock market correction mode.

Markets are up today, but Wednesday saw major losses for all three indexes.

The broad-based S&P 500 closed down 2.5% Wednesday to end below the psychologically important 1,900 level for the first time since Sept. 29.

The tech-centric Nasdaq, an index that widely outpaced the other two major indexes in 2015, is trailing both this year. The Nasdaq sank 159 points to 4,526 on Wednesday.

The small-cap Russell 2000 has suffered the sharpest losses and is now down a punishing 22% from its June 2015 peak. That puts the small-cap index in bear market territory. A bear market is defined as a decline of 20% or more.

The same culprits that plagued stocks in 2015 are weighing stocks again this year. Turmoil in China and an unrelenting slide in oil prices are pressuring equities.

Sam Stovall, U.S. equity strategist at S&P Capital IQ, said that as long as the S&P 500 is below the 1,900 level, the index "will remain in a position of weakness and maintain a bearish bias where traders are most likely to sell rallies and further downside is likely."

As Q4 earnings start pouring in, investors should be prepared for more volatility.

For Q4 2015, the estimated earnings decline for the overall S&P 500 Index is 5.3%, according to FactSet. If the index reports a decline in earnings for Q4, it will mark the first time the index has seen three consecutive quarters of year-over-year declines in earnings since Q1 2009 through Q3 2009.

Money Morning Global Credit Strategist Michael Lewitt has been warning readers about troubling signs in the markets for months.